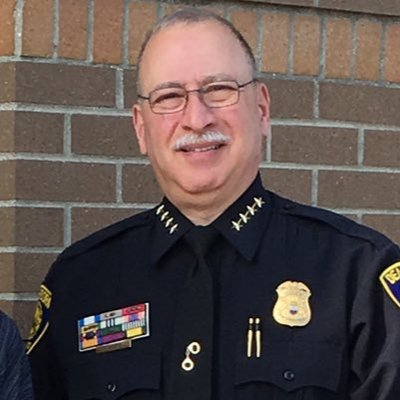 Chief Ronald Haddad: "I don't buy that for a moment." (Photo: Twitter)

Dearborn Police Chief Ronald Haddad is naive, and he proved that at a press conference on Monday.

Standing before a table of marijuana products, including edibles, he announced the arrest of two 19-year-olds accused of trafficking the drug. He said that highlights his concerns about the state law legalizing recreational pot and its impact on minors.

“You can see the packages up here, and it’s quite alarming,” he said, motioning toward a collection that included “a couple pounds” of marijuana, THC oils, a digital scale and vaping products, according to The Detroit News.

“It’s highly unlikely that 19-year-olds, who are acting illegally, are going to sell to older people, because older people can get it legally,” Haddad said.

“We are told that anyone over 21 could legally possess marijuana with a very generous law -- I might add, the most generous in the country as to the amounts you can possess -- and we are told that there was provisions in place to make sure that young people would not have access to marijuana,” the chief said. “I can tell you that I didn’t buy that for a moment.”

Yes, you can't fool the chief.

It was unclear if the products came from a legal shop or black market sales.

Either way, law enforcement is tasked with enforcing illegal sales to people under 21 -- even if the products they're buying are legal. Just like alcohol. Minors can't legally buy a six-pack or bottle of booze.

Did the end of Prohibition in 1933 make it easier for minors to get alcohol? Yes. Did that make legalization wrong? I don't think so.

The chief should stop pretending people under 21 suddenly have access to buying pot.

Adults and minors alike have found ways to buy illegal marijuana for many decades. This is nothing new.

When I was on strike at The News in 1996, I was a substitute teacher at Hazel Park High School. During class, a student pulled out a hash pipe. I told him to put it away and asked the class: "How many of you smoke marijuana?"

About 80 percent raised their hands.

That was nearly a quarter-century ago. I hate to break to you, chief, but minors had access to marijuana long before this law.