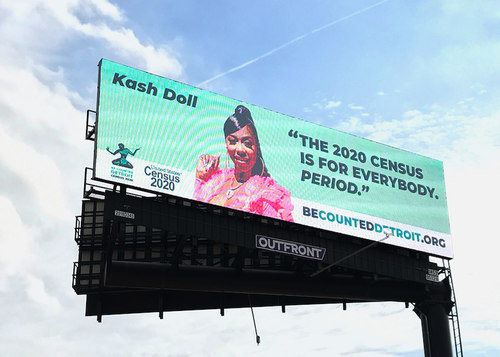 Detroit rapper Kash Doll appears on one of 100 billboards throughout the city encouraging residents to fill out the Census. (Photo: City of Detroit)

If all goes according to plan, Detroiters will this year be inundated with reminders to complete the upcoming Census as part of a multi-million dollar effort to boost participation in what’s expected to be the most difficult-to-count city in the nation.

The city-led promotional blitz will target residents through door-to-door outreach, billboards, radio and social media ads, and at places they visit regularly — including libraries, schools and stores.

Its message: This seemingly mundane task is of great consequence. For each uncounted person, Detroit stands to lose an estimated $5,500 — or $55,000 over ten years — in federal aid, according to city estimates formulated with help from the state’s demographer. Detroit receives about $3 billion in funding for federal programs each year.

Nearly 90 percent of the city has been deemed hard-to-count by the federal government due to a variety of issues, including poverty, abandonment and poor internet accessibility. That’s the highest portion of any major city in the country, according to an AP analysis published last month.

Only 64 percent of Detroiters completed the decennial survey in 2010 — a decline from 70 percent in 2000, and far below some of the city’s neighbors. Livonia, for example, had a 90-percent response rate in 2010. The national average then was 74 percent.

The city’s campaign to boost participation began last year with visits to 130,000 residences in previously undercounted areas. Canvassers found that 20 percent of people were apprehensive about completing the Census, with the top reasons being a lack of awareness of its benefits and concern the information could somehow be used against them.

And so promoting the survey, Kovari says, is only half the battle. Teams will also aim to educate residents, emphasizing the popular programs to which federal money goes — Medicaid and school lunches, for example — and that the information shared is protected.

Kovari calls the effort “monumental” — the most robust city-led campaign in the country.

The effort will be paid for with up to $3.2 million in philanthropic and other contributions, with $600,000 from the city. The state of Michigan is expected to spend $10 million-$15 million promoting the Census statewide.

But the Trump administration has thrown an added wrench into the effort. An unsuccessful attempt to add a citizenship question to the survey is expected to reduce participation among Hispanics and Latinos, who make up about 7 percent of Detroit's population. And the federal government has cut funding for workers to staff Census assistance locations.

The city is focusing its efforts in about 150 “persuadable” Census tracts. They include neighborhoods with growing populations but historically low response rates, like Northwest-Goldberg near New Center; areas with renters and people who use suburban addresses to avoid high auto insurance costs, like Midtown; and places where responses have been good but could be improved, like Green Acres in the northwest part of the city.