The code of an elite suburban Catholic boys' school, it turns out, is exactly the same as that of the streets: No snitching. No one talks, even if someone assaults you with a broomstick. 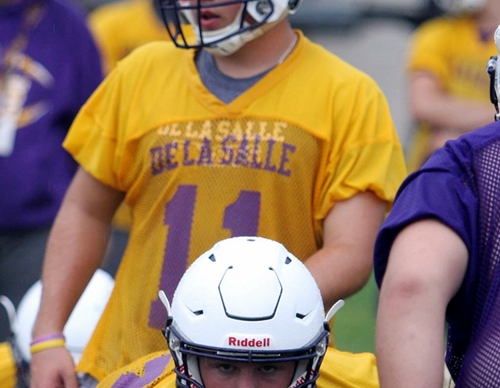 One rule above all: Keep your mouth shut. (File photo)

That's the conclusion of the Tresa Baldas' dive into the speak-no-evil subculture at De La Salle Collegiate High School, Birmingham Brother Rice and even the storied U-D Jesuit. After laying out recent incidents at all three school, the Free Press reports:

This is the culture of silence that for years has reigned at metro Detroit's all-boys Catholic schools, where scandals involving misbehavior of all sorts put students, alumni and families on high alert as many are all too aware that reputation rules the day — and sports is king.

When scandals break, especially ones involving sexual assault, many students and alumni don't publicly talk about it. And the victims keep a super low profile if recent controversies are any indication.

As many alumni and students have said: If you want to survive in an all-boys setting, you have to keep quiet when something bad happens.

"They would rather carry it to the grave than to let someone else know about it," said one De La Salle football parent, referring to sexual hazing victims. "You don't want to be the one to upset the brotherhood."

It's the dark side of the Band of Brothers: The police don't understand us. No one understands us. We're special. We do great work. You don't want to betray your brothers, do you?

And when it is extended, as it might naturally be, into brotherhoods like the Catholic church, well, soon it's the sexual assault of children that's not being discussed, and, well, you get the idea.

Wait, we're editorializing here. Baldas' report is evenhanded, detailing the nature of the incidents at the schools, especially De La Salle, which had to forfeit its final 2019 football game and miss the playoffs, after which the coach was fired. The school is also dealing with a lawsuit and an avalanche of bad publicity. But no player is cooperating with a police investigation of hazing that prosecutors say crossed the line into assault

And then she goes into where these attitudes come from and how they're perpetuated. Among others, you can thank Supreme Court Justice Brett Kavanaugh, who likes to remind people of the code of his alma mater: "What happens at Georgetown Prep, stays at Georgetown Prep." And "that's been a good thing for all of us, I think."

If you have a kid enrolled at an elite "maker of men" somewhere hereabouts, remember that when he's hogtied on a locker-room floor with his classmates laughing at him and poking him with a broomstick: A good thing for all of us.