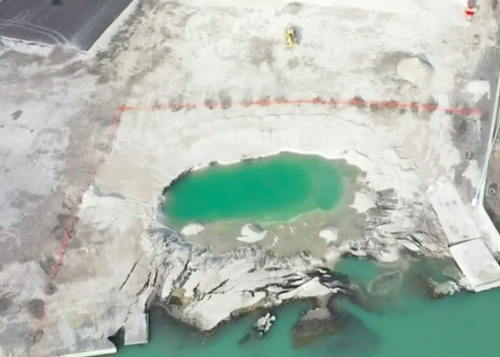 Late last year, after a portion of the Detroit River shoreline collapsed under the weight of tons of aggregate owned by Detroit Bulk Storage, two lawmakers issued a warning: Don't rely only on the company responsible for the mess to clean it up.

The spill sent a massive pile of limestone into the water, tearing open the shoreline and likely disrupting river sediment laden with toxins from years of industrial activity. The Detroit River is the drinking water source for much of metro Detroit, and an intake is located downstream from the collapse (water tests conducted about 10 days after the disturbance, however, did not show abnormal levels of contaminants).

Nevertheless, state environmental officials have relied on Detroit Bulk Storage and site owner Revere Dock LLC for clean up and — surprise, surprise — say they're not fully cooperating and the situation is getting worse. According to Michigan's Department of Environment, Great Lakes and Energy, a sink hole has formed, sending more contaminated soil into the river.

From the Detroit Free Press:

EGLE staff expressed concerns about the interim response efforts in letters sent Thursday to Revere Dock LLC, ...  which owns the riverfront dock area that collapsed on West Jefferson Avenue near Historic Fort Wayne; and to Detroit Bulk Storage Inc. ... The companies had submitted their response plans to EGLE on Jan. 10.

Congresswoman Rashida Tlaib and State Rep. Tyrone Carter urged a different approach at a community meeting following the collapse. Revere Dock, it had turned out, was storing the piles without a permit.

From the Freep's coverage on Dec. 13:

"This is the same company that dumped petroleum coke on the riverfront without anybody’s permission, correct?" said an animated U.S. Rep. Rashida Tlaib, D-Detroit, to applause from many of the approximately 100 people in attendance at a forum on the riverbank collapse.

"This is the same company that said, 'What’s the problem?' For us to say the next step is, we’re going to issue violation letters that are going to make the property owner do this — not Army Corps of Engineers, not EGLE (The Michigan Department of Environment, Great Lakes and Energy). No, we’re going to ask the company that basically waited 10 days to even tell us. To tell the property owners, 'Remove limestone from the river.' Do they have the money to do that? 'Prevent erosion.' We’re asking the company to do that?"

"To EGLE … we cannot allow industries, No. 1, to self-report and self-police. That has to stop," he said.