The state senator from Macomb County with enough swagger for a dozen politicians was bound to get foot-in-mouth disease sooner or later. And boy, did Pete Lucido’s toes tickle his tonsils when he demeaned a young female reporter, while engaging with a group of high school boys at the Capitol.

The schoolboys giggled. The story became national news. And now Lucido is under investigation for sexual harassment by the Senate Business Office. 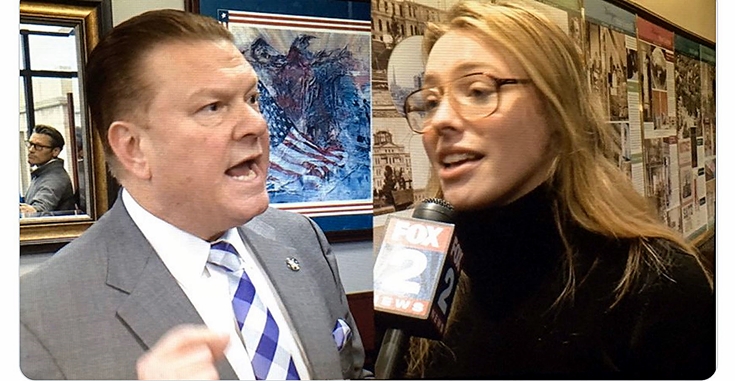 The controversy widened when Sen. Mallory McMorrow, D-Royal Oak, filed a complaint this week, saying the 59-year-old legislator sexually harassed her at the November 2018 orientation session for new senators. The accusation is that he got too handsy, as Lucido might have called it back in his days at De La Salle High School.

When Lucido made his crude remark to Donahue, he seemed to be showing off in front of a group of boys from his alma mater, who were visiting the Capitol. It appears that Lucido has never graduated from the juvenile attitudes he acquired at De La Salle decades ago.

Of course, adding to the self-inflicted damage was that Donahue was trying to get answers as to why the senator was a member of an anti-Gov. Gretchen Whitmer Facebook group. After Detroit Metro Times reported on the page’s hateful, misogynistic and Islamophobic comments, including what sounded like death threats aimed at Congresswoman Rashida Tlaib of Dearborn, the site was quickly deleted.

Before all this, Lucido was cruising toward a run for governor against Whitmer in 2022, but these recent incidents may sink his chances. The senator telegraphed his disdain for Whitmer in a radio interview last year when he said the governor would rather “play with Barbies” than solve a budget impasse.

He announced in May that he was bypassing a run for Congress in favor of a likely bid for governor by offering perhaps the most unique rationale ever for a political career choice. On the Lansing-based “Friday Morning Podcast,” he explained his decision by referring to his need for “pee breaks.”

As a state senator or future governor relying on a car for transportation, “I don’t need to be belted in when I’ve got to use the bathroom,” Lucido told the podcast co-hosts, Dennis Denno and Bill Ballenger. “They (flight attendants) tell me, ‘We’re experiencing turbulence and you’ve got to stay in your seat right now.’

“So … everything has crossed my mind (about being a congressman), including whether I can take a pee break and go to the john.”

With his slicked-back hair and intense facial expressions, Lucido, an attorney, can be intimidating without speaking a word. But he has plenty to say.

His persona as a shouter with an attitude came through in 2015, shortly after winning his first campaign for the state House of Representatives, when he appeared on the long-running news-talk show “Off The Record.” Lucido barked criticisms at the panel of reporters, demeaning their questions. The haughty lawmaker soon moved on, appearing as a regular on Fox2 Detroit’s TV broadcast, “Let It Rip,” where the no-holds-barred format suited him well. 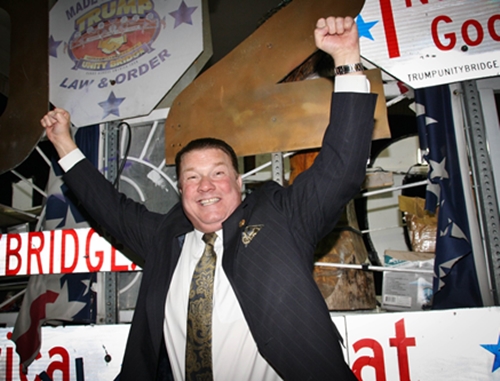 A stereotype of the Macomb County machismo that’s persistent in certain political circles, Lucido’s “I’m right and you’re wrong” approach was on full display, especially after his easy 2018 win for a state Senate seat. He loudly promoted his dubious, low-budget solutions for auto insurance rates and road improvements.

A couple of years ago he commandeered a widely attended Macomb County forum on Lake St. Clair pollution co-hosted by Macomb County Public Works Commissioner Candice Miller. Though Miller, a former congresswoman and local official, had 30 years of experience dealing with the lake’s woes, Lucido, whose House district lay many miles from the shoreline, dominated the conversation. His motivation was obvious. The Senate seat he was eyeing at the time included all of Macomb County’s lakefront.

Lucido’s first appearance on the national stage came when a photo taken of him at a 2016 Donald Trump campaign rally -- his face twisted with rage, fist in the air -- was widely published by the media. Somehow, Lucido emerged as the face of the Macomb County voter.

How did Lucido, who once donated thousands of dollars to Democratic candidates and was openly pro-union, become such a rabid Trump fan?

Another obvious question: How did the MIRS news agency in Lansing recently name him State Senator of the Year for 2019?

Controversial from Day One

Here is a closer look at Lucido’s initial dive into politics during his 2014 and 2016 House races:

So, lots of information here. Let’s just say that Lucido’s critics could “have a lot of fun” with all this.