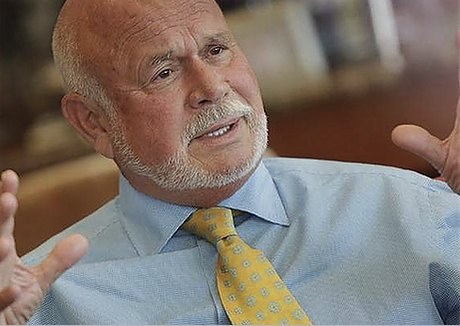 Peter Karmanos Jr.: "Are you kidding me?" (MadDog Technology photo)

Businessman Peter Karmanos Jr., the co-founder of Compuware, says he's pushing for the Trump administration to release ex-Detroit Mayor Kwame Kilpatrick from prison. Kilpatrick was convicted on various corruption charges in 2013 and is serving 28 years.

"What you witnessed was a modern-day lynching," Karmanos said on Charlie LeDuff's weekly podcast "The No BS Newshour" posted Sunday. He says Kilpatrick did nothing wrong and believes the 28-year sentence is absurd.

"We had an arrogant mayor, really smart by the way, who sat in my dining room one day and told the governor (Jennifer Granholm) that he was her biggest nightmare. But he'd done absolutely zero."

Karmanos, who is no longer involved with Compuware, leads a Birmingham-based company, MadDog Technology and is a minority owner of the the NHL hockey team, the Carolina Hurricanes. He is also an investor in Deadline Detroit. LeDuff is a contributing columnist to Deadline Detroit.

On the subject of Kilpatrick, Karmanos said he forwarded Trump a letter Kilpatrick sent to the president asking that his sentence be commuted to time served. Karmanos said Trump is considering the request. He said Jared Kushner, Trump's son-in-law, is handling those cases. Karmanos wasn't more specific as to what, if anything, more he might be doing with the administration on behalf of Kilpatrick.

The Kilpatrick letter, dated April 16, 2019, was published in Deadline Detroit in June 2019. Kilpatrick praises Trump: "I first want to congratulate you for the overwhelming and stunning victories of your Presidential campaign, and also the unprecedented success of your first two years in office."

Karmanos has long been skeptical of the federal government's case against Kilpatrick.

LeDuff asks Karmanos, 76, why he's advocating on behalf of Kilpatrick.

"The 'why' is 28 years. Are you kidding me? Twenty-eight years for less than really $500 of money from his own campaign fund that got spent, and that's it? And a two-person RICO (racketeering charge) that added 20 years."

"All the people who convicted him were Democrats, and he's a Democrat. " Karmanos said. "Barbara McQuade (the U.S. Attorney at the time) was an Obama appointee, the judge, I don't know very well, all the other people."

Karmanos says that if the government proved its case, Kilpatrick shouldn't have gotten more than seven years in prison.

"He looked at me and said, 'Pete, you know better than that. It's too much." I thought to myself, 'this guy is not only smart but he's really quick and he's good with numbers."

At one point in the podcast, LeDuff asks Karmanos if he's a Trump supporter. Karmanos has been known to say he's more of a Libertarian.

First he said, yes he was a Trump fan. Then he clarified: "I'm not a non-Trump fan versus a Trump supporter."

"I'm just not against him. I'm against all the rest."

Listen to the full podcast.