Wayne County has been shamed by its disgusting jail for years, but improving it might be like one of those dreams where the thing you're chasing keeps receding further into the mist. 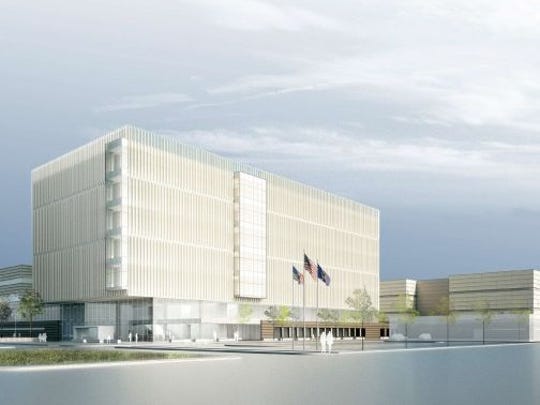 After the disaster of the first try -- a project plagued by cost overruns and a half-built skeleton left to rot on the edge of downtown -- things might not end well for the new one north of downtown, Nolan Finley points out:

Gov. Gretchen Whitmer's task force on jail and pretrial retention produced a sweeping set of recommendations aimed at sharply cutting the populations of local lock-ups by doing away with cash bonds, reducing some misdemeanors to civil infractions and finding better places to house the mentally ill and substance abusers.

Estimates from task force members are that the reforms, if adopted as anticipated, will cut jail inmate rolls by one-third to one-half.

That would leave Wayne County with a lot more cells in the new jail than it needs.

That it would, dooming the new lockup to be a brand-new version of too many buildings in Detroit -- lights on, nobody home.

Over at the Freep, Brian Dickerson goes wide on the aforementioned task force, which is trying to bring reforms to a highly overburdened and dysfunctional system. How overburdened?

In the 40 years since 1980 — four decades in which Michigan's population grew about 2% a year, and Michigan's crime rate plummeted to a 50-year low — the population of the state's 81 county jails has tripled.

It makes no sense. And lest you think this pinko task force must be trying to release all their friends and relations back onto the street, there's this:

The task force in question isn't some prisoner rights group, by the way, but an encyclopedic collection of stakeholders that includes cops, prosecutors, judges, probation officers, bail bondsmen, crime victims and state lawmakers from both parties.

The group's political diversity and collective expertise gave its recommendations instant credibility when they were made public earlier this month, and the state's three most powerful elected leaders — Gov. Gretchen Whitmer, Senate Majority Leader Mike Shirkey, R-Clarklake, and House Speaker Lee Chatfield, R-Levering — have all pledged support for legislation that will turn the task force's sound proposals into statewide policy.

Does this mean some sort of comprehensive legislation may be coming this year to make that happen? Don't be silly -- this is Michigan -- but there could be at least something on the horizon, given the bipartisan and professional approval the task force bestowed.