2020 recap -- Derringer: Time to pull the plug on Mitch Albom

This repost from Feb. 2 is the fifth in a daily countdown of 10 standout articles from this year. Links to earlier selections are at the end.

Pick a movie – a sad one – about a tragic death, and there’s a good chance you’ll find a scene towards the end where a spouse or friend sits by the hospital bed, holding the hand of the dying person and says, It’s OK. You can let go. We got this. You’ll be with papa. 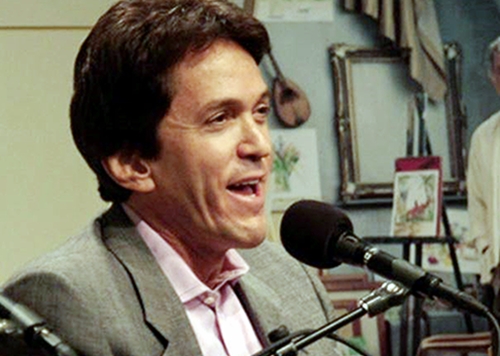 He looks interested in this job, at least. (File photo)

Mitch Albom needs the same mercy. After years and years and years of being the Jessica Fletcher of journalism, the guy who shows up when someone is about to travel to the undiscovered country, it’s time for someone to do this for him.

Not that Albom is dying, not his human body anyway. But seriously -- what is left for this man to do at the Free Press? He’s won his prizes, published his books, funded his charities. Plays. Movies. He’s a celebrity by any definition of the word. But he hasn’t been fresh, hasn’t had an interesting take, hasn’t been anything other than the Grim Reaper’s scribe for the better part of a generation. He can afford his own health insurance. It’s time. He can let go. We got this.

I don’t know why I’m doing this. I spent years of my life, years, devoting a few moments, most weeks, to social-media mockery of Albom’s Sunday columns in the Free Press. I quit a couple years ago, declaring life was too short to pay attention to the peddler of heartwarming life lessons. Yeah, that sounds like something you’d read in a Albom column: “Life’s too short for bitterness,” my dying professor told me as I scribbled notes and texted my agent. “Also, stop and smell the roses.”

And yes, yes, YES, I know that Albom does good work in the world. We all know about his orphanage for Haitian waifs, know that he nursed one for two years in a vain effort to save her from death, a very noble effort that was probably fated to be, because that’s what Albom does – he is death’s accomplice, jerking tears and boiling them down to sap. He doesn’t so much confront the reality of the end of life as assure soccer moms and your grandmother that it’ll all be OK. There’s an afterlife, an ecumenical celestial condo complex where you meet people from your life, greet others who come after, or maybe just have your story told by Music. There’s even a phone booth. And thus is the work of theologians, scientists and philosophers reduced to a Hallmark movie.

I don’t know why he clings to a newspaper column he has plainly outgrown and long ago lost any enthusiasm for. When I swore off bitching about Albom, I thought that if the Freep, if Gannett, didn’t care enough to even lightly edit the guy, why should I? But having been a copy editor myself, I smirked in sympathy with the poor soul who slapped this headline on his Jan. 26 tribute to Kobe Bryant: Mitch Albom: Kobe Bryant’s legendary life wasn’t supposed to end in a nightmare

Really? It wasn’t? You’re kidding me.

As usual with Albom, the duh headline is only the beginning.

Bryant’s death, you should not be even a bit surprised to learn, came “too early,” in Mitch’s view. Thank you, Captain Obvious. Any other thoughts?

Bryant “played with indefatigable joy in his early years and grizzly aggression in his later ones,” and no, I don’t know what he means by that. He “had an ego big enough to invent a nickname like Black Mamba, yet a brain that burned a laser through the toughest defenses.” He liked “his place in the game when he was the young buck, and he liked when he was the elder statesman.”

It almost sounds as though this Bryant fella is best described in a series of generalities crafted as compound sentences, but that’s not my point here. It’s that, once again, Death has delivered on deadline for Mitch.

Is there a need for this? In the thousands of words filed about Bryant after his death, did these add anything worthy of amplification? Because a columnist, especially one as decorated and well-compensated as Albom, is supposed to have something to say that rises above the usual blather. A columnist should tell you the story others missed, swim against the tide as a thoughtful contrarian, or just be a smarter, more sober, more articulate version of the guy on the next barstool.

It’s sad when athletes come to the end of their careers, but it sounds as though Bryant was having a fantastic post-retirement life, dedicated as he was to his family and his advocacy for women’s sports. Racehorses retire to a life of making babies. Albom already has an orphanage full of them, and all the other causes he supports. He’s past 60, but still seems to be in good health. Why is he still writing for a paper that could desperately use his salary to hire actual reporters? Every time he knocks out another tired take, it’s like they dragged American Pharoah out of his paddock, grass-fat and lame in one foreleg, and made him run the Belmont again.

If Albom really took Morrie Schwartz’s lessons to heart, he might consider dropping half of his professional obligations off his plate and concentrating instead on one, maybe two. I nominate the orphans; I actually want to know what he thinks of Haiti, beyond that it is a Tragic Land With So Much Sadness. I want to know what it’s like to deal with the government there. I want to know what happens when the kids age out of the orphanage. That’s just for starters.

There’s more to life than being a ventriloquist for dead people. And it’s not too late to find out what that might be. Let go, Mitch! It’ll be OK!