Oblivious Driver Gets Stuck in Concrete near 8 Mile, Shamed on Twitter by Oakland County Road Commission 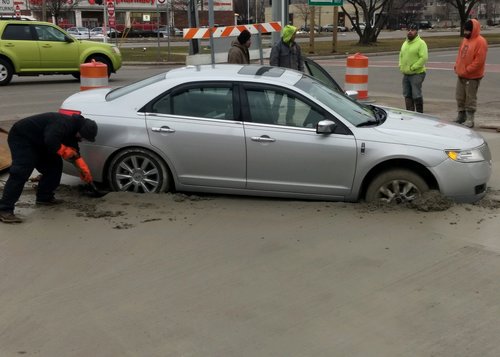 Over the weekend, a careless or disobedient motorist in Southfield attempted to drive on new pavement that wasn’t dry yet. Oakland County road crews were repairing pavement on a section of Lahser Road, just north of the 8 Mile border, when the driver ignored barricades and got stuck in wet concrete.

The construction crew helped unstick the car. However, the driver got several tickets and was billed for the damage, according to the county road commission. Additionally, the commission took to Twitter, publicly shaming the driver who ruined their “artwork,” writing “SMH" (shaking my head).

The NB Lahser pavement repair from the water main break north of 8 Mile was going well until a driver decided to go around barricades. The concrete will be ripped out and poured again. Yes, the driver got several tickets & his insurance will be billed to fix the artwork. SMH pic.twitter.com/gX6IKpr3CV

The pavement was being fixed due to damage from a water main break. Crews will need to rip out and repour that section of concrete, according to the agency.