The federal agency's investigation results in an unfair labor practice complaint against the 1,100-bed Royal Oak facility, sending the dispute to an administrative hearing in downtown Detroit this spring. 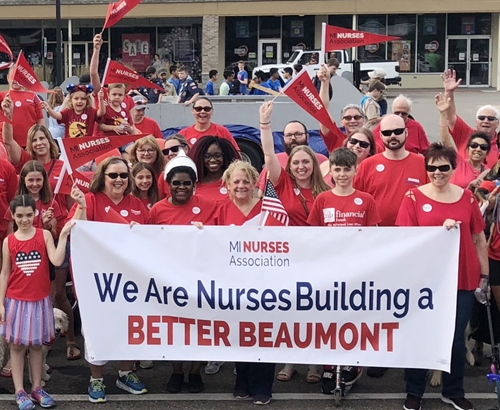 "We are committed to forming our union so we have a real voice in the workplace," nurse Lindsay Kosnak says in a union media release. The hospital has 3,200 nurses.

After looking into allegations filed last July, the board's nine-page finding cites more than 30 instances of potentially unfair labor practices. They include:

The suburban hospital responds in a statement from chief nursing officer Susan Grant, quoted at Crain's:

"Beaumont complies with federal labor law. We believe the allegations in the Michigan Nurses Association's one remaining charge are unfounded, just like the numerous allegations it already dropped or withdrew.

"We look forward to presenting our case before an administrative law judge. ... Final resolution of the MNA's claims may require review by the NLRB and federal courts.

"We are proud of our nurses at Beaumont, Royal Oak for consistently being leaders in nursing excellence. ... We remain committed to our longstanding culture of excellence, collaboration and open communication with our nurses and all employees."

“This ruling comes as no surprise – we’ve been saying all along that Beaumont violated our legal rights. ...

"We are proud Beaumont nurses advocating for our patients, and it's very disappointing that our employer has treated us this way. I'm glad to see steps toward holding Beaumont administrators accountable for their illegal behavior."

The next steps are a written response by Beaumont, due by Feb. 14, and a hearing that begins April 13 at the McNamara Federal Building on Michigan Avenue in Detroit.