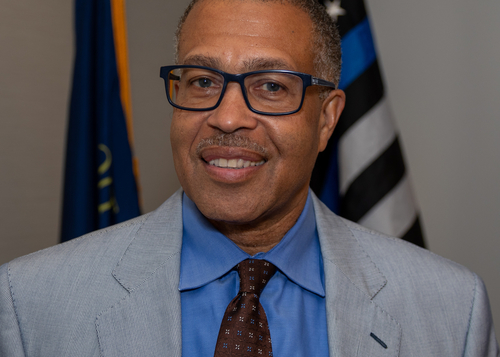 Craig shared his wish list on Sunday’s episode of Deadline Detroit contributor Charlie LeDuff’s “No BS Newshour,” after he was asked what he needed to “make the biggest impact on public safety.”

Though he conceded it’s unrealistic given the city’s tight finances, Craig said the department needs to raise officers’ starting pay from $40,732 to a “conservative” $60,000 to buck an ongoing retention problem that sees 20 percent of new recruits leave for higher pay and safer conditions in the suburbs.

There are currently 2,512 officers policing the city, with funding available for about 150 more. Craig believes 3,500 would be "optimal."

“At the end of the day … to retain cops to have a force that size, you’ve got to pay people top dollar,” Craig said, adding that the pay level is in line with the Cincinatti Police Department's. “Is that realistic? At this time, I don’t think it’s realistic.”

Though the city’s violent crime rate has seen modest declines in recent years, including an overall 4 percent drop in 2019, Detroit remains the country’s most violent big city, according to FBI crime data. The department also continues to grapple with an ongoing corruption problem, which Craig blamed on “complacency and mediocrity” on the part of some officers.

The department’s officers are “grossly underpaid” when compared with those of 17 other police departments in Michigan and mid-sized cities around the country, a report by Detroit’s Legislative Policy Division found in 2018. Getting them up to the average for officers in those departments would likely require at least $21 million per year — money LPD said could be raised by reducing other city costs.

The report noted that during the city’s financial restructuring, salaries were significantly boosted in the finance, IT, and planning departments, enabling those offices to “compete and bring in competent staff.” The salary for a city accountant, for example, has risen more than 80 percent since 2013, from about $54,000 to $99,000 in 2019.

The report ruled out the possibility of raising taxes to collect the money needed, and did not support eliminating tax breaks for developers, warning they could take their business elsewhere and ultimately slow Detroit’s growth.

The Duggan administration has increased the police department’s payroll and benefits budget by $67 million to $232 million since the city's bankruptcy, when officers took a 10 percent pay cut, starting pay fell to about $29,000 and retirement benefits were slashed. Budgeted positions have also increased from about 3,000 in 2014 to 3,337 this year.

“The mayor has continually made public safety the highest priority in the city’s budget,” said Duggan spokesman John Roach. “Clearly, these numbers show a sustained commitment to increasing officer pay and benefits and growing the size of the department.”

In addition to more money for officers, Craig said the department is also in need of new equipment.

Billionaire Roger Penske’s donation of 100 new police cars in 2013 and 2014, he said, was a “great start, but I will tell you the fleets outside of those cars that we did get was a comedy show. I mean paint was peeling off of them. And this is the Motor City!”

This story was updated to reflect a recent increase in the starting salaries for Detroit police.