"We sold out," the maker posted in mid-afternoon on Facebook.

"We were surprised, honored and overwhelmed by the incredible response, which caused us to sell out in just four and a half hours. ... Some bottles may still be available at some liquor stores in metro Detroit and Chicago.

"Paczki Day Vodka will return next year. ... Thank you for making us feel loved."

The 88-proof novelty is made with raspberry pączki from New Palace Bakery and potato vodka from Poland. 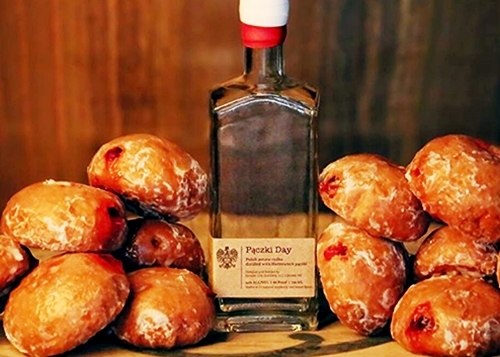 One patient patron, posting on Reddit as "drostandfound," shares this account of his Riopelle Street experience (quoted in part):

My cousin and I thought it sounded interesting, so we stopped by around opening to pick some up. And so did a ton of people. A 9:55 the line went from the tasting room in Eastern Market, around the corner and two streets back.

We ended up waiting in line for around two and a half hours in line to get some, and there was still a very long line when we left. From 10-11, they were selling up to six bottles per customer. This lessened from 11-12 to three bottles per customer. Then at noon, they limited sales to a bottle per customer, and an employee went around counting and told the rest of us in line where the cutoff point was.

Talking to an employee, they said they were blown away by the turnout, and it was very likely that the production of the Fat Tuesday specialty would become an annual affair.

The first person in line showed up around 6 a.m., so I am guessing most people who left with the prized liquor waited at least an hour for it.

Personally, I was able to buy a bottle at 12:15, along with a free sample of the donut delight and a mixed drink made with the pączki liquor.

My thoughts: It's decent. It smells kinda like a donut and tastes like vodka. The pączki is quite subtle overall, with a slight raspberry hint, and maybe some bready aftertaste. After two hours and change, my mind was not blown, but neither was I disappointed. It is a nice vodka.