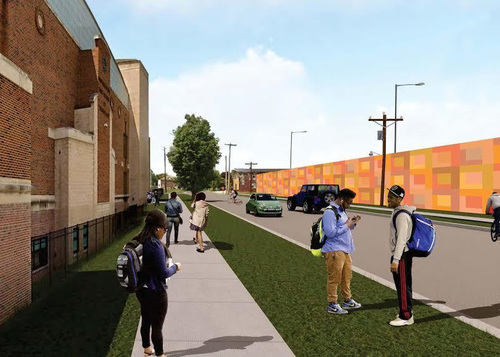 Murals are to cover 1,500 feet of wall along the factory's border. (Photo: City of Detroit)

Dozens of Detroit artists are boycotting the city's call for muralists to paint the perimeter of a Fiat Chrysler plant expansion on the east side, calling it an attempt "to cover up the destruction of a neighborhood."

"We refuse to participate in the mural project unless the city and FCA meet the neighbors' demands addressing damage to their health and homes," reads an online pledge joined by approximately 60 artists, including prolific muralists Vito Valdez, Sydney James, Olayami Dabls and Ijania Cortez. "We support art that is for and by the community, not weaponized against us."

The $1.8-billion expansion of Fiat Chrysler's Mack Avenue Engine Complex will transform the area of Mack and St. Jean, bringing 5,000 jobs. On Feb. 14, the city issued a request for muralists to paint 1,500 feet of concrete wall that divides the factory from the houses and school that surround it.

Artists opposed point to the concerns of a neighborhood group that says construction activity has rattled and shifted homes and kicked up harmful dust. The Just Beniteau Residents fear environmental problems will worsen when the plant, which includes an 800,000 square-foot paint shop, is up and running. An air quality mitigation plan submitted by Fiat Chrysler to state regulators was earlier this month rejected as insufficient.

The wall is part of a $14-million community benefits agreement negotiated between a partially elected group of residents representing the area and the automaker, which will receive $400 million in public subsidies for the project. The deal includes $15,000 for repairs for each house nearby. 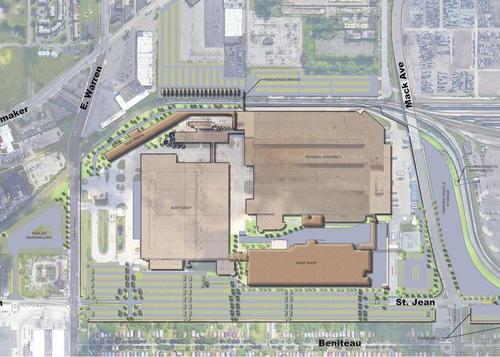 But the Beniteau group, which says it represents the majority of residents along the street closest to the factory, says that's not enough.

"Our foundations are being further damaged by the vibrations from construction and increased truck traffic. Windows that were solid before construction are now damaged and won’t seal," a statement from the group says. "We need more money."

Specifically, they want Fiat Chrysler to cover the cost of foundation repairs, new windows and roofs, and air-quality certified central air and furnaces.

A representative with the automaker did not immediately reply to an email for comment.

The city says it meets regularly with residents on Beniteau to work through their concerns, but that it had no say in the $15,000 figure.

"The vast majority of residents, particularly those who have been engaged in the process from the beginning continue to be supportive of the new FCA plant," said Department of Neighborhoods district manager Letty Azar. "We understand that there are a handful of vocal residents who feel differently."

Azar says the residents also support the mural to be painted around the facilty. And despite pushback from local artists, the city says it has already received nearly a dozen submissions.

"This is an exciting one-of-a-kind project that will beautify the wall residents requested be installed as part of the FCA community benefits agreement," said Zach Meers, who runs Detroit's City Walls arts program and will oversee this project. "We look forward to working with neighbors on this project as it moves forward."

Darnell Gardner, a Beniteau Street resident who was appointed by the Duggan administration to the neighborhood advisory council that negotiated the benefits deal, wrote in response to this story:

It was destroyed and left behind long ago. Where were all these people before this project? Were they helping us protest all the abandoned homes or helping us stop the nightly drag racing on St. Jean. No!  They were somewhere else looking for a spotlight and a microphone so people can hear them complain about whatever.

Yes I was/am a member of the neighborhood advisory counsel for this FCA project and if people can get more out of this god bless em. But it does not mean that we were screwed in this process.