Hall, the acting superintendent since last February, is on a 10-day unpaid suspension for flinging two vile words during a public board session last week, Michigan Radio reports.

Hall called an African American district employee a racial slur and another profane slur during an open school board meeting Feb. 10.

The 46-year-old used the n-word and "motherfucker," according to the Romulus Education Association teachers' union. The target of his anger was an assistant girls’ basketball coach fired from Romulus High School, according to The News-Herald suburban paper. 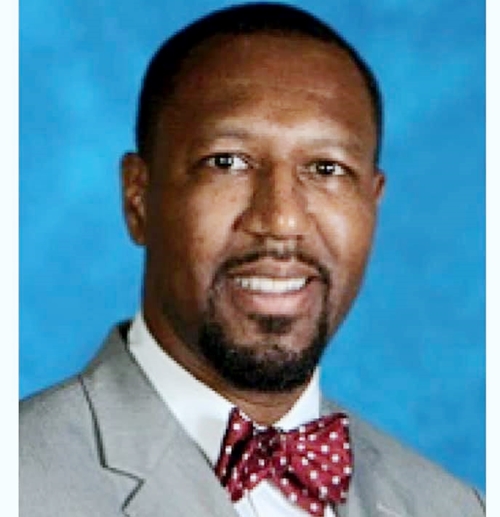 Flinnoia Hall is a past principal of Henry Ford High School in Detroit, his roots.
(Photo: Romulus Community Schools)

Education association president Sarah Carter calls the suspension "a slap on the wrist," according to the public radio group's coverage by Sarah Cwiek. Board members should look for a new superintendent to replace Hall go when his interim contract ends in June, Carter said.

"That is not the kind of behavior and conduct a role model engages in," Carter said. "That’s not the type of conduct we want to see in a school leader."

We call on community members and employees serving the students of Romulus Community Schools to attend the next school board meeting (Feb. 24 at 6 p.m.) and let our board members know that this type of conduct from district leadership will not be tolerated.

Hall, who has a 1995 education leadership degree from Ferris State University, was principal of Henry Ford High School in Detroit in 2013-14. He then joined the western Wayne County district as a Romulus High School principal.

Hall rose to acting superintendent early last year after Marjie McAnally was placed on administrative leave because of what board members described as a breakdown in her relationship with them.

When the board voted 4-3 three months ago to make him superintendent this July, president Ed Martell said on Facebook: "Hall is an ideal candidate for this position. He is academically accomplished, has extensive educational experience, and most importantly, is personally vested in our children and community."

His career began as a Delta College admissions counselor in Bay County, Mich., from 1999-2008. Other employers include public school districts in Saginaw and Highland Park, his LinkedIn page shows.