Choices of how to renew vehicle and watercraft registrations expand.

In addition to doing so online, by mail or -- for some unfathomable reason -- at a Michigan Secretary of State branch, drivers can use kiosks at 28 Meijer stores -- including two in Detroit and a dozen more in the tricounty area (list below). 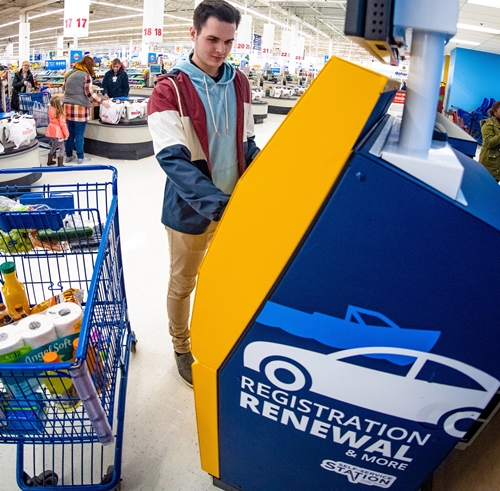 No need to bring a renewal form sent by mail. Eligible vehicles can be renewed in about two minutes with just the plate number and last four digits of the Vehicle Identification Number (VIN).

The self-serve stations, installed in a rollout that began last October, replace clunkier versions that often broke, printed blank tabs or ran out of tabs, a media handout says. The devices, resembling those for airport check-in and car rental, allow renewals for autos, motorcycles, Jet-Skis and boats. (Vehcile plate tabs are printed on site, while watercraft tabs are mailed.)

Transactions can be in Spanish or Arabic instead of English. A $3.95 extra fee is added to each.

The touch-screen machines "will add numerous driver-related transactions once the Michigan Department of State completes the second portion of its computer system upgrade in March 2021," says the release, which lists all current locations.

These are in our metro region, with more promised: