Only in the age of surveillance cameras can a $200 dine-and-dash become news for a metro area of more than 4 million souls.

What is shaping up to be a likely case of mixed signals got a spot on WXYZ Monday night and a follow-up in The Detroit News today, as Janice Jones of Detroit found her face plastered on lord knows how many TV screens, accused of absconding from Amore da Roma with a large catering order for a work event, one she didn't pay for. After her phone rang for hours Monday night and her sleep more or less destroyed, The News reports it looks like a misunderstanding:

Jones says she called the restaurant the night before, to confirm the order, that it was in her name, and believed it had been paid. She made a small addition to the order, for a vegan colleague, and paid for it. She said she still has that receipt.

Late Monday night, Karlton Akins, a spokesman for Team Wellness (Jones' employer), contacted The Detroit News, writing that the food "was supposed to have been paid for over the phone via credit card," and describing the entire ordeal as a misunderstanding.

On Tuesday morning, Team Wellness Center paid the bill, a staffer at the restaurant who declined to give her name confirmed.

The culprit in this molehill amplification project is surveillance video, of course. If you have a decent shot of the "suspect," you can give it to all the media, particularly TV, and trust they'll do the rest for you.

Poor Janice Jones probably wishes she'd never agreed to pick up the catering order, so we won't post her photo with this. Instead, here's the veal limone from Amora da Roma, via the restaurant's Facebook page: 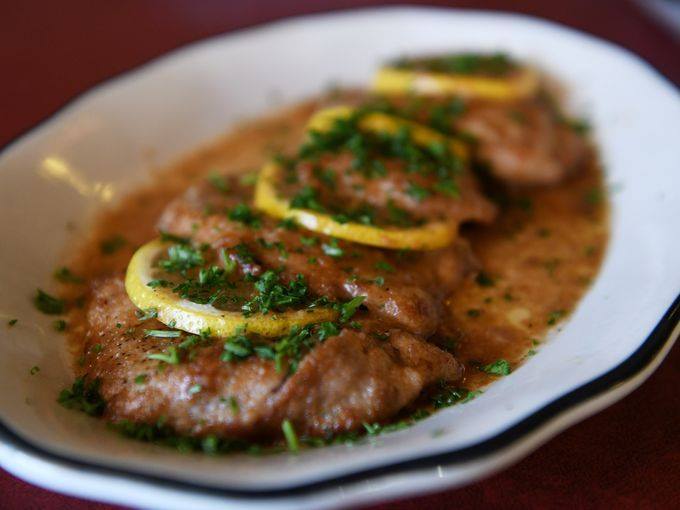