LeDuff: In a snowstorm, one Wayne County Libertarian keeps the flame burning 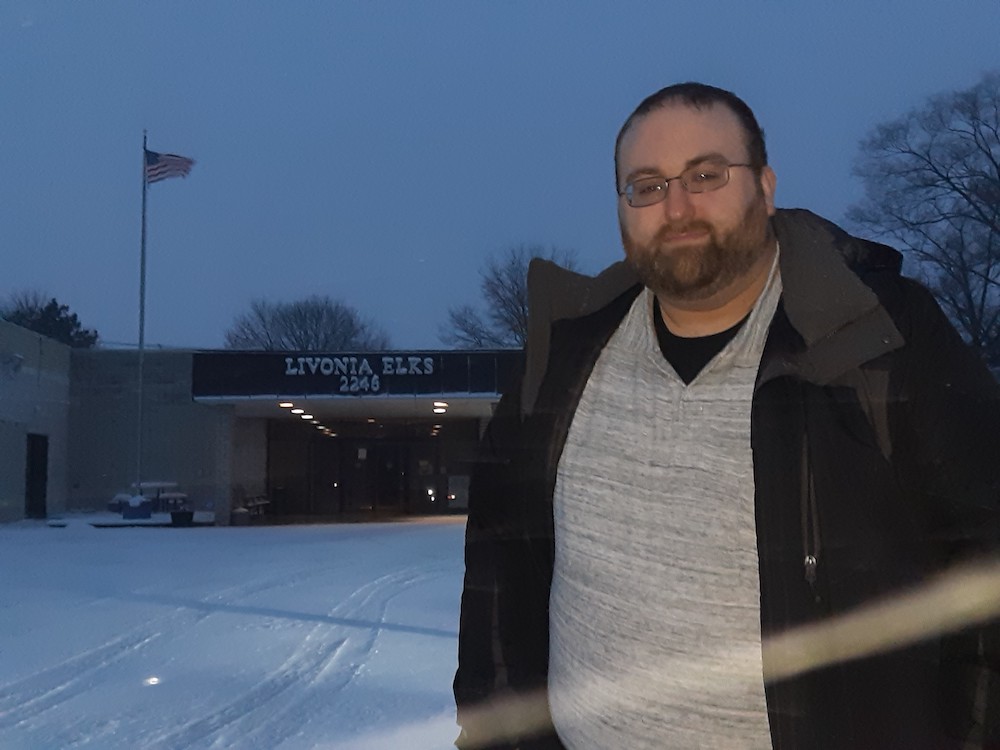 Being a Libertarian Party member means you can have you cake and deny it too.

You can say you're a liberal, but then again you may call yourself a conservative. You like your guns, but you hate war. You demand law and order, but you despise the police state. You believe private industry is the way to a more perfect union, but then you rail against runaway crony capitalism.

Basically, you're the type of person who wants your neighbor to change his kid's sagging diaper, but then again you're not calling child protective services. It's none of your business.

And then there is a certain bar stool satisfaction to being a Libertarian. When it comes to national politics and the two-party stranglehold, you can say you voted, but  not for him or her.

In short, Libertarians are constitutional purists wrapped in laissez-faire economics wrapped in a woolly sweater.

But they are an important political force, the mother of all American third parties, a fringe movement that may very well swing this razor-thin presidential election.

A Quinnipiac University poll, released last week after the New Hampshire primary shows it to be tight in Michigan between Trump and major Democratic candidates.

Here in the Great Lakes state, where Trump defeated Clinton by a paltry 10,704 votes, it should be noted that Libertarian candidate Gary Johnson pulled 172,000 votes.

The Quinnipiac poll shows Michigan as a toss-up. Bernie Sanders and Michael Bloomberg each exceed President Trump by 5 points, and Joe Biden leads by 4 percentage points.

In short, as things tighten up, the Libertarians could be the deciding difference.

And so I braved this week's storm to make my way to the Livonia Elks Lodge #2246, located somewhere between the Taco Bell and White Castle, where the Wayne County Libertarians were holding their monthly general meeting.

County snowplows were working furiously and I wondered how the Libertarians would feel about that. I had all kinds of questions of this sort.

Sadly, the Wayne County Live-Free-or-Die crowd is not as hardy a group as its website would lead you to believe. No one had yet to arrive.

Imagine George Washington calling off the Battle of Valley Forge due to inclement weather. No, that would never do. So I waited. The sign in the darkened lodge window read:

Finally, a U-Haul 10-footer pulled into the unplowed lot. It was a black man and woman. Could it be that the Libertarians of Western Wayne County are a new bastion of racial brotherhood?

He pulled next to me. “They ain't no bingo tonight?”

“No,” I said. “The Libertarians are meeting here tonight. You gonna stay and join the revolution?”

“Naw, if there ain't no bingo, me and my old lady are gonna get out of here and go watch some TV in the warm.”

“Would you consider Trump?” I asked.

Not Ruling It Out

He had not ruled out the Trump, the coiner of the term “shithole countries.” The pronouncer of Mexican rapists. The banisher of Muslim immigrants. America was right there in that U-Haul, a much richer and more complex place than the make-up wearing mannequins on TV would have us believe.

A sensible American-brand SUV pulled into the lot next. The driver parked diagonally from me. I could see through the windshield, he was a slightly rotund white man. Too old to be a millennial, too young to be an Elk. He was jowly, with a patchy beard. His hair was thinning. His eyeglasses oblong and set high on his nose. Definitely a Libertarian, I thought.

For the better part of an hour we waited for someone, anyone, to open the doors and turn on the lights of Lodge #2246.

Finally, he exited the SUV and approached. “Are you here for the Libertarian meeting?”

His name was Andrew Chadderdon, a 33-year-old automotive engineer for a supplier. He lived in a house in Westland and rented a room to a friend. He grew up Republican, grew disenchanted with their wars, their debt, their expanding government, their economic collapse.

And so he voted last time around for Trump “to throw a wrench into the system,” and then quickly grew disillusioned with Trump's mechanical abilities.

“The wars continue,” he said. “The special interests thrive and the government is running a trillion-dollar deficit.”

“Well, Bernie promises to end the wars, too,” I offered.

“Yeah, well his economic agenda. I'm just not on board with the socialism aspect of it,” he says. “How do you pay for all that? I subscribe to a free market economy. I'd like to see the government shrink, not grow.”

The guy seemed absolutely normal, standing in a snowstorm in thin shoes and an unzipped coat, lost in a two-party system that he sees working to maintain itself rather than nourish his dreams.

And if you needed any symbol of how its going in this section of working-class America, go to Westland  Mall, which shares its city's name and is a moat of empty parking lots surrounding discount department stores.

“This economy is smoke and mirrors,” he said. “I'm worried about things. Record deficits and spending. It doesn't matter the party. Whoever gets control benefits their friends.Not us.”

And with that, Andrew Chadderdon, patriot, taxpayer, Libertarian, got into his sensible SUV and drove home to his sensible house in an average corner of America believing he had not a friend in Washington.