"Susan Watson's work and community commitment have made her an admired journalist and a respected human being," says the closing line of a Michigan Journalism Hall of Fame induction dinner salute.

Twenty years later, those qualities are saluted again after the former Detroit journalist's weekend death at age 76. "We are going to hold a memorial service later this month to celebrate her life and the city she loved," son Allen Watson of Maryland posts Monday.

"Watson made us laugh and think and she thrilled us with literary flourish," past colleague Stephen Henderson posts Monday about a woman he calls "an idol." They worked together at the Free Press, where Henderson rose to editorial page editor and won a 2014 Pulitzer Prize for commentary. Watson was a reporter, editor and columnist during 30 years at the paper (1965-95).

Her "fierce and witty analysis, as well as her majestic storytelling about the city of Detroit, made her one of the most explicit templates for the column I'd grow up to write," adds Henderson. "No one captured life in this city and region the way she did; no one has since. I chuckle when I hear anyone talk about who's the 'voice' of Detroit. She was. She is. She will be. Forever." 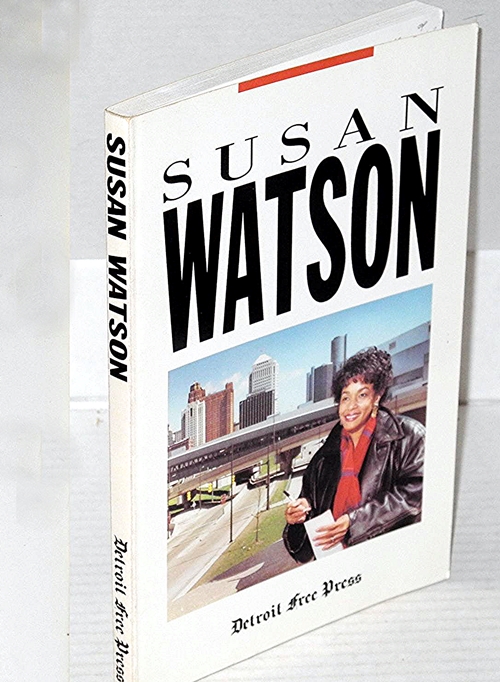 ► "Twinkle in her eye:" Those of us blessed with working at the Detroit Free Press in its golden days had Susan Watson as our friend, mentor, sage, journalist, editor, columnist and conscience. With a twinkle in her eye, she once told me that God was a black woman. -- Bill Day, former Freep editorial cartoonist, now syndicated and working at FloridaPolitics.com

► Inspiration: She is one of the people who made me want to be a writer. -- Marsha Battle Philpot, Detroit author and speaker

► "I was lucky:" Susan Watson was an amazing reporter, city editor, columnist, union sister and Free Press colleague. She combined attitude, ability and a love for Detroit and Detroiters to make her one of the city's all-time great journalists. I was lucky to have worked with her for many years. -- Bill McGraw, Deadline Detroit co-founder who earlier worked for 32 years at the Freep as a city-desk reporter, sportswriter, Canada correspondent, editor and columnist

► "She was fearless:" When I started at the Freep in 1983 on the copy desk, I wondered who this barb-tossing woman. She introduced herself shortly afterward with kindness: I'm Susan Watson, and I'm the city editor. If you have questions, ask me. She was fearless, a mentor and passionate in everything: from her son, to journalism, taking on Coleman Young as a columnist, to being a key leader during the strike. Detroit will miss her — so will I. -- Roger T. Chesley, freelance journalist in Norfolk, Va., who was a Freep copy editor, police reporter and city hall reporter from 1983-95 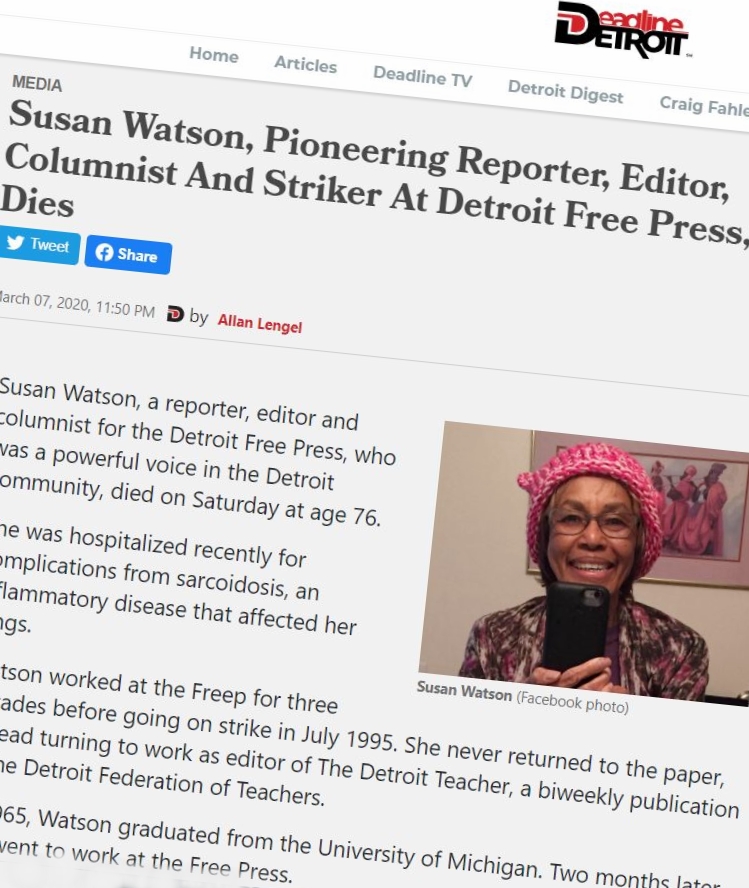 ► "A new view of life:" Loved ger her column and her "Seeker of Wisdom and Truth" [self-description]. She brought a new view of life with her words and her experiences. -- Susan Rowe, past principal at Detroit Cristo Rey High School