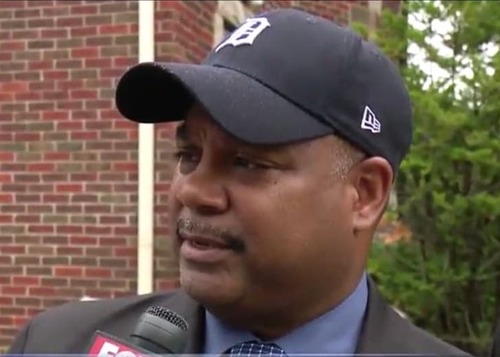 Capt. Jonathan Parnell in an interview with Fox 2 News.

A Detroit police captain has died from coronavirus.

Capt. Jonathan Parnell, who went by the nickname “Recon,” headed homicide based out of headquarters. Over his 31-year career, he worked in homicide, sex crimes, child abuse and narcotics.

“He was a great guy, very tactical, very smart, he was a street cop, a real street cop, very polite, very humble,” said someone who had worked with Parnell.

Parnell was in his fifties and leaves behind three sons.

"He was hardworking, well respected, I'm sure everyone would describe him that way," said his son Jonathan Parnell II, 25.

At a news conference Wednesday, Detroit Police Chief Jamed Craig called Parnell an "extraordinary officer, a leader who contributed more to this department than I could ever say."

Our deepest sympathy to the family and friends of @detroitpolice Captain Jonathan Parnell. A true leader, a true friend and a great person @ChiefJECraigDPD #DetroitPD #ProtectAndServe #OurCommunity pic.twitter.com/HjMfTHiF8D

Dana Nessel, the state attorney general, tweets Wednesday afternoon: "I had the privilege and honor of working on many cases with Capt. Parnell. He was a gentleman, a dedicated public servant and just an all-around great guy. Thank you for your service, Jonathan. You have touched the lives of all who knew you and you will be missed terribly."

Parnell was not hospitalized at the time of his death, Craig said, though he did visit with a hospital "but was at some point released to home."

More than 200 officers have been ordered to self-quarantine as the result of a coronavirus outbreak within the department. As of Wednesday, Craig said 18 officers had tested positive for the illness.

As of late Tuesday, Detroit had 11 deaths and 574 confirmed coronavirus cases.

More of the latest news: