Federal, state and city officials at TCF Center on Saturday, planning to set up a field hospital. Three more scenes are below. (Photos: Emily Schaefer/Army Corps of Engineers)

The U.S. Army Corps of Engineers is coordinating work to provide field hospital facilities for an expected overflow of COVID patients in April from overwhelmed Southeast Michigan hospitals.

The corps' Detroit District "is well underway in its coordination and planning efforts to adapt more than 250,000 square feet of the convention facility into medical care space," it says Sunday in a statement.

“We are proud to work hand-in-hand with our partners at FEMA and the state of Michigan and leverage our engineering expertise to help save lives,” said Lt. Col. Gregory Turner, district engineer.

Michigan Governor Gretchen Whitmer said in her announcement of the effort: "We are proud to partner with the U.S. Army Corps of Engineers, FEMA and the TCF Center to expand capacity in Detroit. By mobilizing quickly to construct a large alternate care facility in Detroit, we can help save lives."

The military branch "anticipates it will take 24 to 36 hours to place a contract, at which point the TCF Center team will activate their personnel to start construction activities. Actual construction is expected to begin shortly thereafter."

In related news, Macomb County executive Mark Hackel tells WWJ on Sunday that he's working with the Army Corps and Micchigan National Guard to identify potential sites for erecting a field hospital or retrofitting an existing location for patient care.

The feeling of a war-like atmosphere ramps up Saturday with preparations for something we've never seen downtown.

The move comes a day after the U.S. surgeon general said the situation in Detroit will worsen next week.

The U.S. Army Corps of Engineers on Thursday and Friday evaluated TCF Center and 14 other local sites -- including the Lexus Velodrome -- as potential backups to Michigan hospitals that might hit capacity due to an influx of coronavirus patients.

“The State of Michigan has asked FEMA for assistance in responding to a critical shortage in hospital space due to the spread of this virus," says Lt. Col. Gregory E. Turner, Detroit District commander of the Army Corps, who was at TCF Center on Saturday and his quoted on his agency's Facebook page "We're going to bring the full resources of the U.S. Army Corps of Engineers and our engineering expertise to bear against this problem."

NAIAS executive director Rod Alberts says in a statement: "The health and welfare of the citizens of Detroit and Michigan is paramount. TCF Center is the ideal location for this important function at this critical and unprecedented time." 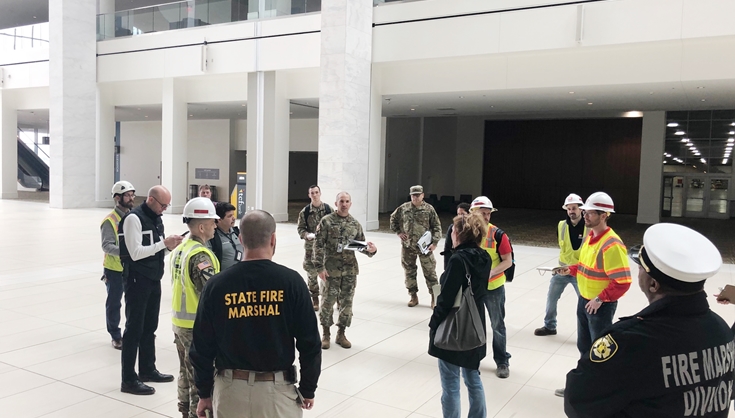