Derringer: She said she was tough. Now Gretchen Whitmer is dressing that way, too. 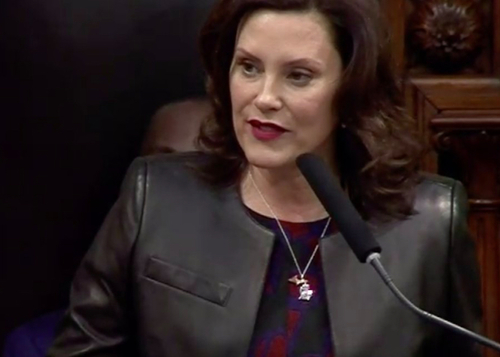 Stipulated: There is a time to ask “who are you wearing” and a time to keep your mouth shut. This is a grim time, and it’s important to honor its seriousness. People are falling ill. Many are dying.

Also stipulated: Even in a serious time, optics matter. Gretchen Whitmer has been, as the news cliché goes, thrust into the spotlight by the coronavirus pandemic, along with other governors. Spotlights almost always have cameras behind them, and optics matter. Mike DeWine of Ohio mostly wears a business-as-usual suit and tie, a sweater on the weekends. Andrew Cuomo of New York has kept the jacket and lost the tie, and there was that polo shirt a few days back, sometimes a fleece, both branded with an official seal.

Whitmer has made a different choice. Not every day, but enough to notice: Leather.* 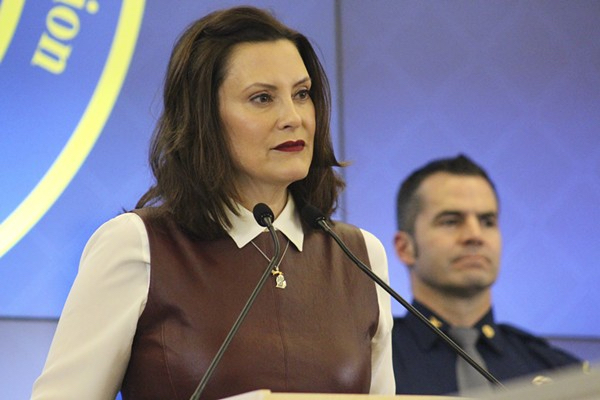 On March 20, a more subtle choice (Photo: State of Michigan)

Optics matter, and they matter most for women in the public eye. And all swiftly learn one lesson: You can’t win. Everything you wear, and I do mean everything, will be second-guessed and picked apart and criticized, or at the very least, noticed and commented on, in a way that your male colleagues’ clothing isn’t. (Unless you’re Jim Jordan.) So you might as well follow your instincts.

Whitmer learned early, when her first State of the State outfit in 2019 was singled out for supposedly drawing attention to her figure. She tweeted back, “I’m tough, I can take it,” and came back for 2020’s speech in a leather jacket. Can’t get tougher than leather. At least not until women can wear armor, and it may well come to that.

(Was this criticized, too? Do you have to ask?) 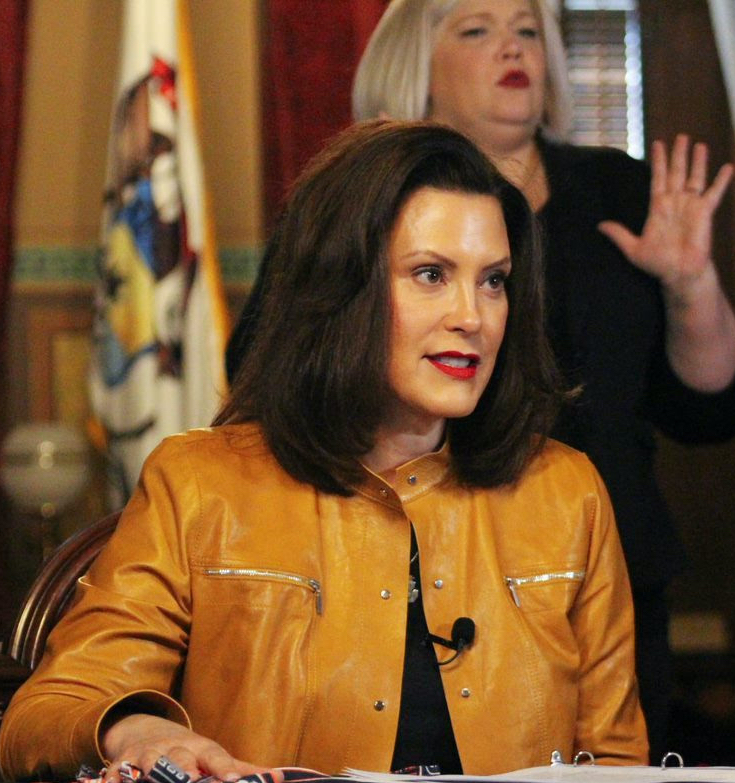 Whether she’s dressing for a yoga class or the Oscars, every woman stands in front of her closet in the morning and, consciously or unconsciously, asks herself a question: Who am I today? What message am I sending with this skirt, this dress, these shoes? This goes double for women in the public eye. Hillary Clinton’s pantsuits and Elizabeth Warren’s cardigans-over-black both said, We’ll always be presentable, but we’ll never fuss too much over getting dressed. You know, like you’re afraid we might do. Whitmer’s personal style has never been that austere, but she has now chosen leather for public appearances two more times since this crisis commenced. It’s impossible to think she isn’t aware of the image she’s crafting. (Especially when you consider that this jacket, worn on March 10, looks a little like body armor.)

What is the message her clothes are sending? Maybe: I’m Daenerys Targaryen, Imperator Furiosa, Joan Jett and maybe a little bit of late-period Michelle Obama, in a gown of literal chainmail. Come at me with your dull little knives; I will fend them off. She wants to project an image that says one thing: Strong. As the British say, she’s in fighting kit.

Smart politicians know that words are one thing, and images quite another. Ronald Reagan knew this. Bill Clinton knew this. Barack Obama knew this. Certainly Donald Trump knows this.

And pretty much every woman alive knows it. When the going gets tough? Reach for leather.

A word about leather*: I haven’t seen these outfits with my naked eye, and certainly haven't run the governor’s clothing between my fingers. It may not be animal skins and could very well be pleather, or “vegan leather.” But it "reads," as they say on the fashion shows, as leather.