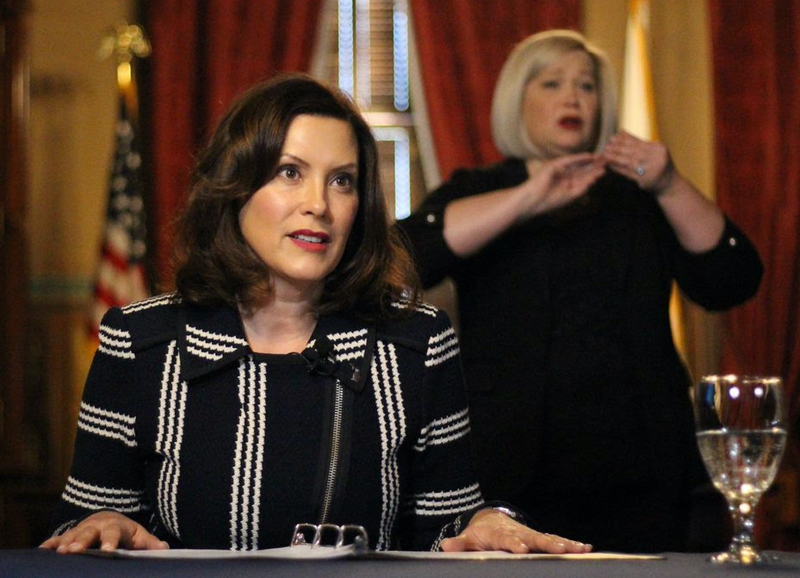 The mass protest in Lansing on Wednesday against Michigan's restrictive stay-home order caught the nation's attention.

Michigan Gov. Gretchen Whitmer, appearing on MSNBC long after protesters had dispersed, was asked by host Joy Reid: "Some of these people were flying, not just Trump MAGA flags, but also Confederate flags. ... What do you make of people flying Confederate flags on your streets to protest a stay-at-home order that's meant to save their lives?"

Whitmer had a strong answer, but dodged the obvious answer Reid was fishing for about the Confederate flag.

"It really wasn't about the stay-at-home order at all," Whitmer said. "It was essentially a political rally, a political statement that flies in the face of all of the science, all the best practices...It looks like a lot of people and it felt like a lot of people but in the bigger scheme of things, Michigan is a state of 10 million people, the vast majority of whom are doing the right thing. Our hospitals have stepped up, our nurses, our doctors, the average citizen whose staying home or is contributing in some way to help people on the front line. That's the story of what's really going on here.

"This group, a small group of people that came together without masks on, who were passing out candy with bare hands to children, who were congregating together, who were brandishing their weapons, who were having posters of being anti-choice; this was a political rally, it was a political rally that is going to endanger people's lives, because this is precisely how Covid-19 spreads."

"And let me just add one more thing. The cars were blocking one of our hospitals, so an ambulance literally wasn't able to get into the bay for 10 minutes. This is the kind of behavior that extends the need for stay home orders, that spreads covid 19."

Protesters said the stay-home order was too restrictive and encroached on their freedom.

The protest and the Confederate flags certainly caught the attention of people around the country, and was a hot topic on social media. Morris "Moe" Davis, a Democratic Congressional candidate in North Carolina, who is a retired Air Force colonel, lawyer, educator, and former administrative law judge, posted this on Twitter:

Confederate flag overlaid with the Moron Lube motto and a gun on display in the capital of the confederacy, Lansing, Michigan. That may be Trump’s America, it’s not mine. pic.twitter.com/uXrQeml73d

#Confederate The only reason why the protesters in Michigan are waving Confederate flags is because they know it triggers libs and leftist politicians. They have the right to protest even with that flag, but not all are doing it because they are racist but because they're pushin.