Starkman: Beaumont Speaks Truth to Metro Detroit and its Workers: It’s All About the Benjamins, Baby

Beaumont Health’s announcement Tuesday that it is "temporarily" laying off 2,500 employees and eliminating 450 positions because business is down speaks volumes about the difference between Michigan’s largest health care company and HCA Healthcare, a Nashville-based company whose shares are traded on the New York Stock Exchange. Beaumont bills itself as a nonprofit while HCA’s mission is to make as much money for its shareholders as possible.

HCA, with hospitals in 21 states, is admittedly a lot bigger than Beaumont. Like Beaumont, the novel coronavirus has hammered HCA's business because it can't perform elective surgeries, which is how hospitals make the bulk of their profits.

HCA, which has treated 5,500 Covid-19 patients, reported Tuesday  that its first quarter profits were down 45 percent and suspended making dividend payments to its shareholders. That’s a big deal because CEO pay is dependent on shareholder enrichment.

In normal times, HCA’s chief executive, Sam Hazen, is a poster boy for what socialist Senator Bernie Sanders maligns as the “greedy” and “corrupt” corporate executive. Hazen earned $27 million last year, 478 times the median salary of HCA employees. All that money appears to have kept Hazen’s blood warm and flowing.

Hazen is donating his salary for the next two months to a company fund that provides financial aid and resources to help HCA employees facing financial hardship. Company directors also are forgoing their compensation. Moreover, HCA has pledged to employees that it will try to avoid layoffs, and that those whose hours have been reduced will either be redeployed or made eligible for a “special pandemic pay program” that continues 70 percent of their base pay for up to seven weeks.

Hazen, in these times of duress, is what my grandmother would call, “a real mensch.”

Now let’s take a look at how Beaumont is handling what, if all goes well, is a temporary blip in a lucrative business that’s generated so much nonprofit the company has more than $2 billion in cash and securities sitting around. Beaumont claims that it “proudly cared for more COVID-19 patients than any other system in Michigan.” That’s hardly a surprise since Beaumont is the biggest health care system in the state and its hospitals are located in a hot virus zone.

Beaumont CEO John Fox claimed at an online news conference that the company was at capacity at the height of the pandemic. Channel 7’s Heather Catallo previously reported that Beaumont pawned off 39 patients to VA hospitals in Detroit and Ann Arbor, some on ventilators. Fox acknowledged that patients were transferred but insisted it was to facilities that could offer more specialized treatments. He said that shuttling people around on ventilators is common and quite safe. Alarmingly, Fox claimed that some Michigan hospitals refused to take Beaumont’s overflow.

This possibly explains how three Beaumont Covid-19 patients on ventilators, one from Grosse Pointe, ended up at a hospital in Marshall more than 100 miles away. One of those patients was taken on a joy ride 48 hours later to Kalamazoo because the hospital’s contracted dialysis company refused to come in on a Sunday. At the time of the Marshall hospital transfer, Calhoun County had only a smattering of coronavirus cases, none of which required patient intubation.

What distinguishes Beaumont’s management from that of HCA’s is their respective treatments of employees. Despite the downturn, HCA wants to keep its workforce intact as long as possible, rather than have them go on the dole. HCA’s efforts to make employees whole includes support staff and those who booked off sick because they contracted the coronavirus.

By comparison, Beaumont said it is temporarily laying off 2,500 employees, allowing them to apply for “enhanced unemployment benefits available through state and federal programs.” When business picks up, Beaumont said “employees could be asked to return to their roles.” Put simply, Beaumont wants to park employees in unemployment lines rather than tap into its $2 billion stash of accumulated nonprofit money.

My head is spinning trying to understand the $500 to $1,000 hazard pay program Beaumont told nonunion employees treating Covid-19 patients they’d receive. To qualify, a caregiver had to work a minimum of 40 hours in the two weeks between March 22 and April 4th, despite the virus reaching its peak April 10. Part-time and contingent nurses aren’t eligible, nor are nurses who were called in to care for some Covid-19 patients.

According to the program’s fine print, a Covid caregiver who worked 37 hours during the qualifying period but called out sick because of symptoms consistent with the coronavirus wouldn’t qualify. Beaumont’s flack is on record as saying that four percent of Beaumont’s employees at one point were out sick with symptoms consistent with the coronavirus. 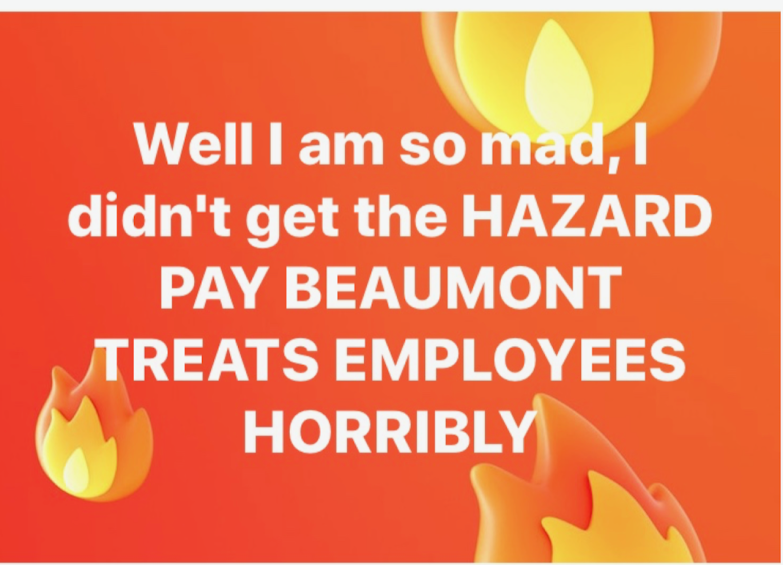 Someone posted on a Facebook site for Beaumont workers.

Beaumont is having trouble keeping its stories straight. When it closed its hospital in Wayne last week, the company said it was operating under “several executive orders” that restricted the kind of care Wayne can provide because it needed to be prepared for a second pandemic wave. At the news conference, Fox said Beaumont Wayne has received permission to resume operations for care other than Covid-19.

I’m not alone in my confusion about Beaumont’s statements and claims. Rep. Debbie Dingell told Channel 7 that she can’t get straight answers from Beaumont and is alarmed about “the number of doctors that have called concerned about other Beaumont hospitals in the area.” Dingell and Rep. Rashida Tlaib, both of whom received campaign contributions from Beaumont, have written multiple letters to the company.

If Governor Whitmer hopes to inhabit One Observatory Circle, she’d better hope President Trump doesn’t get wind that under her watch a regional trauma center hospital and one designated to treat Covid-19 patients closed in the midst of the pandemic. Beaumont’s closing of its Wayne hospital continues to generate controversy. WDIV reported Tuesday night that the Wayne County Health Division has launched an investigation to determine whether a makeshift Beaumont morgue at the facility violates county health ordinances. The hospital insists it has done everything on the up and up.

What does all this have to do with Ruth’s Chris and J. Alexander’s? Congress approved a $350 million loan program to help small businesses keep employees on their payrolls, but some of that money found its way to Ruth’s Chris, J. Alexander’s and other chains. Money earmarked for hospitals has yet to be distributed.

Not surprisingly, Fox is among those who support an industry lobbying effort asking Congress for a lump sum of $30,000 per bed to offset lost money from elective procedures. As Beaumont has 3,429 beds, that would result in $103 million in additional income. It’s in Beaumont’s interest to sing the financial blues because it buttresses the company’s argument for a government bailout.

Beaumont said that Fox’s base pay has been cut by 70 percent, but he wouldn’t disclose his salary. Fox’s 2017 compensation, the latest which is publicly available, was $5.6 million, including a bonus and deferred compensation. Beaumont has previously said that “a large portion” of Fox’s compensation is “at risk.” 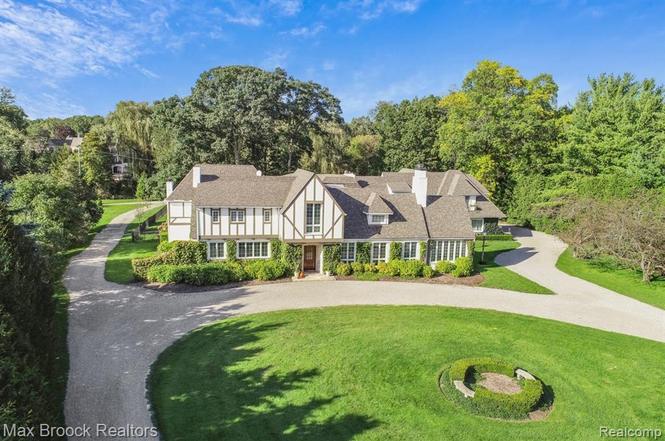 John Fox's Bloomfield Hills home is on the market.

Beaumont’s net income last year soared 165 percent to $390 million, so presumably Fox was eligible for a hefty bonus likely paid out in the past month or so. The timing of the payout is significant if it was made after the severity of the pandemic was known. As well, even with his 70 percent base pay cut, Fox could still receive a huge bonus if he’s successful getting Beaumont to quickly resume its high margin surgery business.

That’s if Fox plans to stick around. The accountant by training put his 8,000-square foot Bloomfield Hills estate up for sale in October for nearly $3 million. Based on published reports, he’s 72 or thereabouts, and last month he completed his fifth year on the job. I asked Beaumont’s PR guy whether the hospital company has a mandatory retirement age and about a dozen other questions, but the only response I got was a link to a news release I had already made reference to.

In my experience, when PR folks opt not to respond to questions, its often because they don’t have very good answers.

Starkman: Beaumont’s FU To Metro Detroit And Its Covid-19 Workers