Sex Assault Survivors to Whitmer: Siding with Biden a 'slap in the face'

Gov. Gretchen Whitmer is facing backlash from sexual assault survivors for defending Joe Biden against an accusation he forcibly fingered a former staffer. 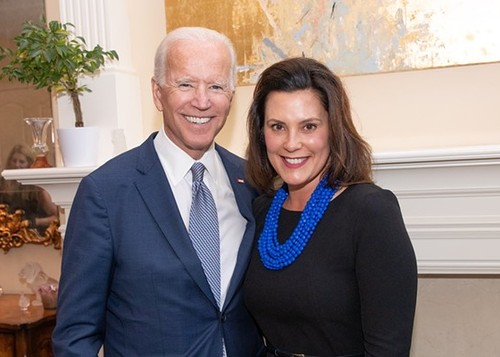 Whitmer joined a growing number of leading Democrats in dismissing Tara Reade’s allegations last week, sparking cries of hypocrisy from both sides of the political aisle.

Progressives and Republicans have accused the party of employing a double standard for victims, pointing to the case of Christine Blasey Ford and Brett Kavanaugh as evidence it supports only the allegations that serve its agenda.

“When you’re going to judge anyone’s guilt or innocence along party lines, you’re going to lose all credibility and damage a lot of people in the process,” said Bridget Huff, 40, the Progressive Caucus Chair of the Michigan Democratic Party.

Whitmer’s office did not respond to a request for comment.

Of the party figures who’ve weighed in, Whitmer walks a tightrope, balancing her vice presidential prospects with a reputation as a sexual assault survivor and women’s rights advocate.

“As a survivor and as a feminist I’ll say this: We need to give people an opportunity to tell their story, but then we have a duty to vet it. And just because you’re a survivor, doesn’t mean that every claim is equal,” she told CNN’s Jake Tapper Sunday.

Of the alleged 1993 incident, she said, “I don’t believe it’s consistent with the Joe Biden I know and I do believe Joe.”

The accusation facing the presumptive presidential nominee is, like many sexual assault accusations, complicated and difficult — if not impossible — to confirm. In some ways, it’s a classic her-word-against-his: Reade says that while she was serving as a staffer for Biden, he pushed her against a Senate wall and digitally penetrated her against her will. Biden says it never happened.

Lending credibility to Reade’s claim is the fact that multiple people have corroborated her account, saying she attested to suffering some sort of sexual abuse at the hands of the senator at the time. A woman Reade has identified as her mother called into the Larry King show in 1993 for advice with a daughter who’d had “problems” with a “prominent senator.” And Biden is known for an overly familiar nature that some women say has made them uncomfortable.

On the other hand, Reade, like survivors including Whitmer, waited decades to publicly share her story. It’s also a far more extreme allegation than the harassment claim she shared with media last year. And several former staffers she claimed she’d told of her problems with the  then-senator have denied ever hearing from her.

The Senate has declined to make public a complaint Reade says she filed about Biden’s behavior, nor will it say whether such a complaint even exists.

As a liberal columnist at The Washington Post recently wrote: “For every piece of information that suggests she’s telling the truth and Biden did sexually assault her, there’s another that suggests the opposite.” And, as with many sexual assault cases, no one beyond the two parties involved will likely ever know for certain what transpired.

Whitmer appeared to concede this in the CNN interview as she expressed resentment over being asked about the case at all.

“I’m just sharing some of the simmering anger that we survivors have every time that we’ve got to confront this from someone else’s behavior that we weren’t a party to, that we weren’t even of the reality in the moment,” she said.

“I have read a lot about this current allegation and I’ve watched Joe Biden and his defense, and there is not a pattern this goes into this,” she said.

Many people have said this exact same thing about my former boss who sexually harassed me, despite having a 40+ page conclusive report. There are other ways @GovWhitmer could have addressed that question and I’m extremely disappointed.

Whitmer’s statements are consistent with a set of talking points circulated by the Biden campaign to surrogates, which incorrectly cite an inconclusive New York Times investigation as proof “this incident did not happen.”

Survivors and advocates have taken issue with Whitmer’s response, calling it a politically convenient rush to judgment that undercuts the #metoo movement. The case is not closed, they argue, noting that media outlets continue to uncover more information and documents that could shed light on what happened have not been made public.

“I think to see any person who comes forward diminished is a disservice to every single victim who’s still holding onto their story and future victims who should be able to tell their story,” said Huff, who says she was raped more than a decade ago but never named her assailant because he was well-respected and she feared no one would believe her. “When people ask why victims don’t come forward, Whitmer’s response is why.”

It’s a sharp contrast from the way in which Whitmer was received seven years ago when, during a speech on the floor of the state Senate, she shared that she’d been raped as a college student. Whitmer’s goal at the time was to “put a face” on the people who would be affected by a controversial bill to ban private insurance plans from covering abortion. She didn’t succeed in changing any votes, but she has said her words did encourage more women to come forward with their own stories.

Whitmer has since become somewhat of a local face for the #metoo movement, speaking out on sexual harassment at the state Capitol and quickly ousting a former campaign manager who’d been accused of “inappropriate behavior” with former co-workers. Last year, she concluded her speech at a campus sex assault symposium at Eastern Michigan University with this message for survivors: “I see you, I hear you, I believe you … I carry you in my heart every day, and I’ll never stop fighting for you.”

Huff and two other survivors with whom Deadline Detroit spoke said they felt Whitmer should have stayed silent or called for a more robust investigation before shooting down Reade’s claim.

Whitmer has never provided details on her alleged rape, but indicated the 2013 speech was the first time she ever made the assault public. She has not publicly named an abuser.

“I don’t know what she felt taking sides was going to lend to the situation,” said Lois Smith, 49, of Burton. “I just felt it was political suicide because women, not even women who’ve necessarily gone through something of this nature, but just all women — unless they’re true Democratic Party purists — it’s not going to sit well with them.”

Smith, Reid and Huff, progressive Democrats who voted for Whitmer in the 2018 general election, said they would not do so again.

But an expert says it's unlikely Whitmer will lose significant support for her stance with so many Democrats squarely focused on defeating Donald Trump, who has faced far more sexual misconduct complaints than Biden.

“She’s aligned with the Democratic Party women on this,” said longtime political prognosticator Bill Ballenger. “On the other hand, Whitmer has a long history going way back of hypocrisy when it comes to charges like this. If anything comes up involving a Republican or conservative, she’s all over it, and then if the same thing comes up with respect to a Democrat, you hear nothing.”