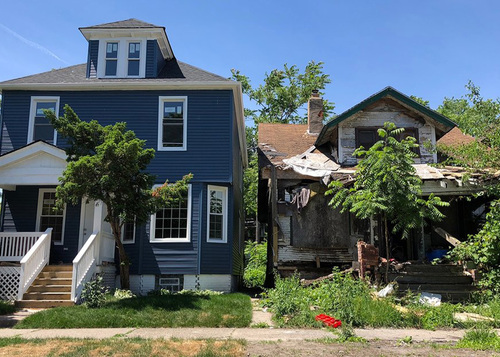 A landlord who sought to "positively effect" Detroit's Islandview neighborhood is now at the center of what may be the city's largest coordinated rent strike. (Photo: Astral Weeks)

At 10 rental homes scattered throughout Detroit’s Islandview neighborhood, on the east side, a landlord and tenants are at an impasse that could result in their eventual eviction.

The tenants, who recently formed a union, have stopped paying rent, citing lost wages or additional expenses resulting from the coronavirus crisis. In response, their landlord has hinted at legal action, saying it has bills to pay, too. Money for the homes was borrowed, and failure to pay it back could result in their foreclosure.

The group of tenants has, effectively, launched a rent strike: Their landlord, a partnership of developers Reimer Priester and Alex DeCamp, has refused to meet with them about demands including a short-term rent suspension, though has signaled a willingness to provide unspecified relief on a case-by-case basis. The group is now withholding payments in an act of resistance.

Across the nation, renters facing the prospect of long-term unemployment or reduced wages have skipped rent either because they can’t afford it, or in a collective effort to pressure their landlords or the government to come up with solutions amid a financial crisis that could last years.

But because tenants, landlords and lenders are often interdependent, it’s unlikely that a widespread rent crisis can be averted through landlord concessions alone. Experts say significant government intervention is needed to head off mass evictions as more people are unable to make rent and mortgage payments, and that failure to act could plunge the U.S. into another housing crisis.

“There’s a need for some kind of [governmental solution] — we’re certainly way off from where we need to be,” said Ted Phillips of United Community Housing Coalition, a Detroit nonprofit that helps residents facing eviction. “Just looking at what people seem to owe, it already appears there will be a pretty large escalation (in evictions).”

Detroit, in particular, is at great risk, with about 60 percent of households renting, the majority of whom are already considered “rent-burdened” — meaning they spend more than a third of their income on housing-related costs. The effect of mass evictions in the city would be devastating, with the housing market still struggling to bounce back from consecutive waves of mortgage and tax foreclosure following the Great Recession, and an ongoing eviction crisis that ensnares tens of thousands of residents each year.

A caravan demonstration in Detroit calls on Gov. Whitmer to enact a plan to help renters. (Photo: Detroit Eviction Defense)

On Wednesday, housing rights advocates held a caravan protest downtown to draw attention to the issue. Detroit Eviction Defense, the group behind the event, is calling on Gov. Gretchen Whitmer to extend a statewide eviction ban for at least 60 days after a state of emergency is lifted, and cancel rent and mortgage payments for the duration of the outbreak.

The fallout from the pandemic has yet to hit in earnest, thanks to the halt on evictions slated to last through at least Friday, along with federal stimulus checks and unemployment benefits. Full and partial rent collections in metro Detroit had dipped just 3 percent over last year in the first week of May, according to data from RealPage.

But when the moratorium expires and benefits dry up, Phillips expects numerous shock waves to hit Detroit. A first round of evictions will come as soon as the moratorium is lifted, when orders in the works before the pandemic hit are carried out. A second is anticipated about a month later, as cases of those who’ve been unable to pay in April and May — often, he says, because of delayed unemployment benefits — make their way through court. Another wave is expected after late July, when a federal eviction moratorium on affordable housing expires. Then another is due six months from now, as the clock runs out on the state’s 26-week unemployment benefit allotment.

Detroit’s 36th District Court has paused evictions for the duration of Whitmer’s stay-home order, to expire May 28.

Though portions of Michigan’s economy have restarted with Covid-19 cases on the decline, health experts predict the U.S. outbreak will persist for up to two years, requiring intermittent economic shutdowns and long-term closures of high-risk sectors, like the restaurant and events industries.

In Islandview, tenants staring down that uncertain future have asked their landlords to agree to three months of full rent relief to be followed by rent payments tied to income. Some are unable to pay, and others have joined the strike in support of those who can’t. 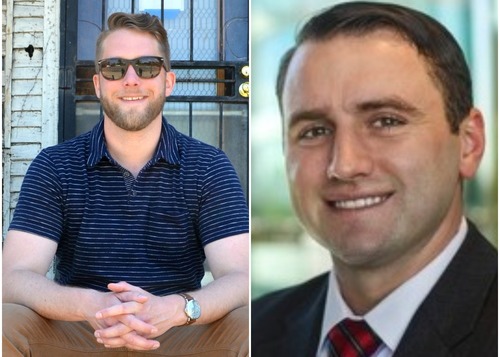 “Some of us have lost work or businesses, while others have seen their expenses skyrocket and have needed to care for family and friends during this time. All of us are affected,” the Villages Properties Tenants Union said in a statement. “After years of supporting our landlord with our rents, we are now asking them to support us and the community.”

Additional requests of Priester and DeCamp, who rehabbed the houses with help from outside investment after buying them for cheap at the county tax auction, range from lead abatement to the installation of security systems. Residents also want them to meet with the surrounding community to hear its concerns.

The duo is behind numerous development projects in the area, including the rehab of 13 rental homes with plans for at least 40 more. But their track record is mixed. A local community group — the Charlevoix Village Association (CVA) — has accused Priester and DeCamp of speculative practices that have made Islandview unaffordable for long-time, working-class residents. The rehabbed single-family homes at the center of the strike rent for an upwards of $1,500 per month.

Priester, who owns about 140 Detroit properties, also had at least $50,000 in unpaid blight tickets as of late February, city records provided by CVA show.

In an email to tenants, a representative with Priester and DeCamp’s Villages Property Management said they were open to working with tenants individually, but would not meet with the union. The representative said the company had consulted with an attorney and took umbrage at their requests.

“The eviction moratorium is not meant to be used as a sword by tenants to try to get ‘extras’ that are beyond the scope of their lease by withholding rent knowing they cannot be evicted for the time being,” said the company's property manager. “A judge is unlikely to be sympathetic to unions or tenants who try to take advantage of those laws during these times. Especially where a landlord has voluntarily indicated a willingness to work with those individual tenants experiencing financial hardship.”

But the tenants stress the need for collective action, saying they’re fighting on an unlevel playing field that puts investor interests over the needs of regular people. 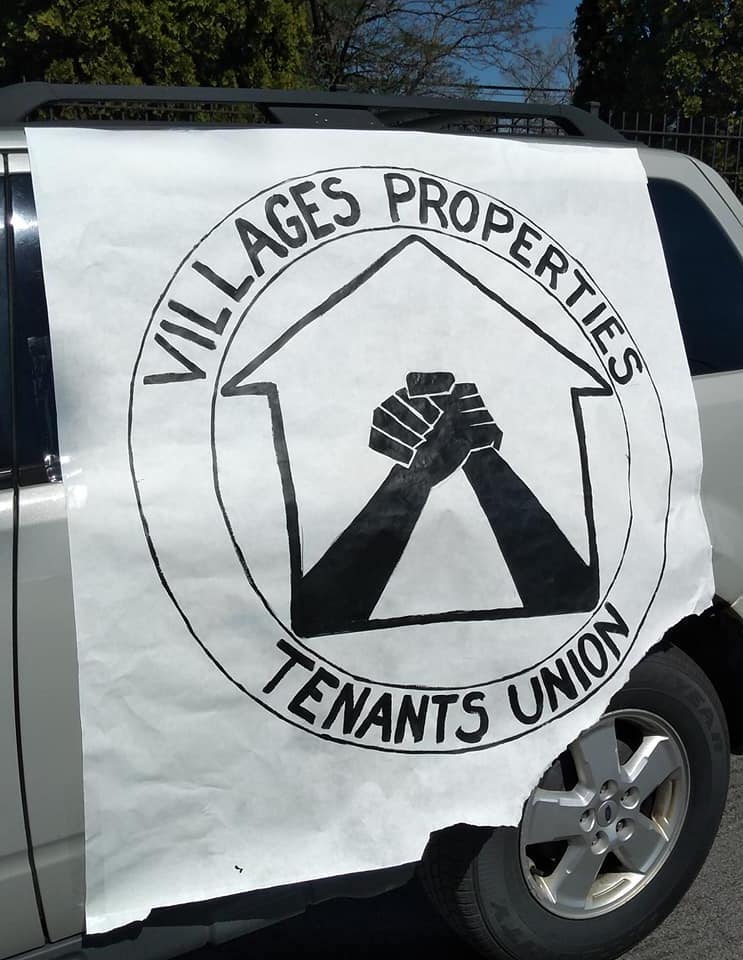 “All of the laws protect property owners. We’re always in the defensive (as tenants),” said a union member who asked not to be identified, so as to prevent the landlords from singling out residents. “In history, the only way working class people have gained any rights within housing is through strikes. We’re following in their footsteps to gain a voice for ourselves and the community going into an economic depression.”

Phillips, of UCHC, says it’s in a landlord’s best interest to come to a compromise: finding new tenants who can pay the same rate will be difficult in a pandemic, and vacancy costs landlords not only rent, but could result in a home being entered and scrapped.

But he acknowledged that landlords often face their own financial constraints. Some are “mom and pops” who may rely on rentals as a primary source of income, while others may be large-scale property owners beholden to shareholders or investors.

Proposals to stave off mass displacement and keep landlords paid have been put forward at the local and federal levels. A bill introduced in the U.S. House would cancel rent and mortgage payments for the duration of the outbreak regardless of income or employment status. It would also create a fund to help landlords and lenders cover their losses, though they would be required to follow certain rules to receive aid, like freezing rent and adhering to fair housing practices.

The National Low Income Housing Coalition has estimated it will cost about $76 billion to provide a year of rent relief for the 12 million people it estimates will soon be severely housing cost-burdened.

Absent federal intervention, Joshua Akers, an assistant professor at the University of Michigan-Deaborn who researches housing trends in Detroit, has recommended that state and local policymakers enact a plan similar to the one proposed in the House. He says the state could use $42 million in funding made available by the U.S. Department of Housing and Urban Development as part of the CARES Act. Another $31 million is available to the city of Detroit.

Akers stressed the urgency for action, warning that the fallout from mass evictions and mortgage foreclosures could put Detroit back on a downward spiral. In addition to educational and health disadvantages, displacement in the long run fuels a vicious cycle that bleeds the city of people and funds.

“Putting money into preventing eviction now pays off in the long term,” said Akers, noting that Congress, in the wake of the Great Recession, found the average mortgage foreclosure costs  $78,000, but only $3,300 to prevent.

When asked whether any policy solutions were in the works to address the potential crisis, a spokeswoman for Whitmer responded that “Protecting our most vulnerable during this pandemic is certainly a priority,” and pointed only to the eviction moratorium to expire Friday.

Detroit Mayor Mike Duggan’s administration says it’s in the process of deciding how to spend its HUD allotment, and that it will eventually submit a contracting plan to City Council for approval.