With new coronavirus cases on the decline, Michigan has been getting back to business at a slow but steady clip. On May 11, Gov. Gretchen Whitmer reopened the state’s manufacturing sector, which employs more than 600,000. The Detroit Three automakers brought back factory workers May 18, and on May 21, Whitmer permitted groups of up to 10 to gather again with distancing safeguards. Retailers were permitted to reopen with restrictions May 26, and elective medical procedures and vet visits were cleared to restart May 29.

The state is among the last to reopen its economy after being walloped by a first wave of coronavirus infections, and for some the resumption of business is long overdue. Nearly 2 million people have filed for unemployment and the state faces a $6.2-billion budget shortfall.

But public health experts are sounding the alarm about reopening portions of the economy in such close succession, warning that without adequate contact tracing and testing, it could trigger a second surge that erases the gains of months of painstaking safety measures.

“This disease (is) extremely hard to deal with ... (in) that it moves exponentially rather than linearly,” said former Detroit health director and epidemiologist Dr. Abdul El-Sayed, who ran against Whitmer for governor in 2016. “And exponential curves are hard to appreciate because you go from one to two, two to four, four to 16 ... And that kind of dynamic is really hard to just track. And so when you start seeing numbers, they can explode on you pretty quickly.” 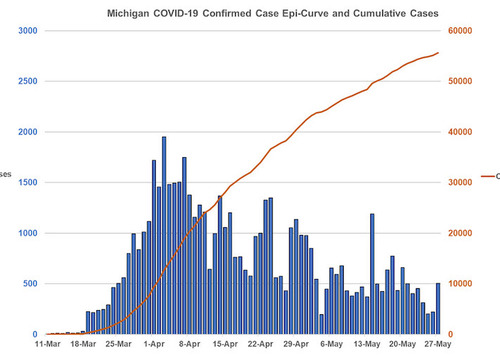 Whitmer’s easing of a monthslong stay-home order comes amid signs the virus is slowing and the state is better-equipped to handle another big outbreak. On Wednesday, new daily cases fell to about 500 since their April peak of almost 2,000, and the state recently increased testing to its goal of 15,000 per day, in line with a Harvard University benchmark.

But the low case totals Michigan is seeing now are evidence of the transmission rates of at  least two weeks ago, due to the virus’ up-to 14-day incubation period and an often five-day lag in test results. Ideally, experts say a waiting period of at least three weeks to a month is needed to assess the impact of each change the state is making, pointing to the length of time it took for cases to drop after Whitmer instated the stay-home order March 23.

“With any disease we don’t feel comfortable (drawing conclusions) until we have two times the incubation period,” said Dr. Jeffrey Band, an infectious disease specialist previously with Beaumont Health System. “Fourteen days is very liberal. Twenty-one would be not unreasonable with very close monitoring.”

In addition to running the risk of triggering a second wave, Band and others say that when changes come in close succession, it becomes difficult to determine which may have sparked an increase and mitigate accordingly.

Whitmer has taken an incremental and regionalized approach to re-engaging, acknowledging that the lag period prevents her from knowing the full impact of her actions.

Northern and lower Michigan have been divided into two categories due to their disparate rates of infection, with more relaxed rules for the former. Remaining provisions of the stay-at-home order have been extended through June 12. 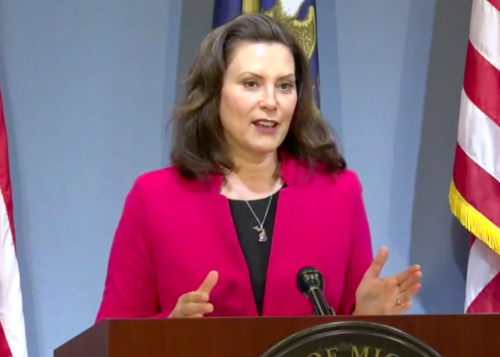 Gov. Gretchen Whitmer announces the latest round of re-engagement May 21.

“We’re going to need to take some time to ensure these measures are working,” Whitmer said in announcing the latest loosening. “We want to continue turning this dial, but we are going to stay tethered to the data and the epidemiology to know when it is safe to do that. We can’t drop our guard and run the risk of a second wave.”

Cases are on the upswing again in about a dozen states that reopened sooner, according to a New York Times analysis.

In an email, Michigan Health and Human Services spokeswoman Lynn Sutfin said that the state assesses data for two weeks before phasing in activities that are “riskier in nature,” but that “the two weeks of data take time to settle and be analyzed, so three weeks is possible.”

In order to reopen safely, experts and the state have said a decline in cases and robust contact tracing and testing are needed. But Michigan’s contact tracing program, which will eventually rely on 9,500 volunteers and be propped up by millions in federal dollars, still lags, experts say.

“You've got to train them, you've got to build the infrastructure to manage the data, and you've got to be able to deploy them,” added El-Sayed. “It's not something you can just stand up … in a couple of weeks or a month. We just really haven’t (done this before).”

The state has thus far trained just 350 contact tracers with plans to have another 150 ready to begin work by the end of the week. So far the contact tracers are helping six of 45 local health departments who've requested assistance.