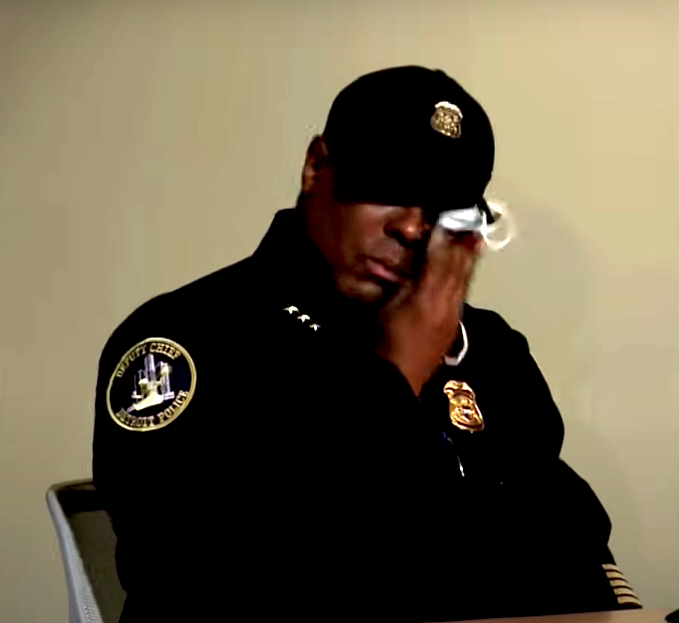 It all began, he said at a Tuesday press conference, when he walked out of police headquarters on Third Avenue and saw protesters lined up in opposition with police. An 8 p.m. curfew had already begun.

"I assessed the situation and I said: 'This is not good. It's not good.' And I'm like, 'I have to do something.' I didn't want any violence. I went to the front and I saw organizers and I saw a lot of angry people."

He said he told the group he didn't want any violence and that "these officers, all of us, our hearts ache" over George Floyd's death in Minneapolis. He said he was disgusted by the videotaped brutality.

Because officers were in tactical positions, he decided, it was best that he just kneel.

"I didn't understand why the protesters were angry at us, Detroit Police, when we work so hard in the community to connect," he explained. "And I tried to relay that to them, we're not the problem, we're here with you. We don't want to be in this place, this space. But I understand the anger for what happened to George Floyd."

"So with that being said, I kneeled and someone from the crowd tossed something at one of our officers and the tear gas was deployed and they dispersed. But my heart was heavy because I didn't accomplish what I wanted to."

Violence broke out. Tear gas was everywhere. Police fired rubber bullets and tackled some protesters. Arrests were made.

"I was kneeling on behalf of the department, the city of Detroit and all of its citizens, everyone. And I did. It was emotional."

When Chief James Craig showed up, "I didn't even tell him I kneeled. It wasn't about that. It was about the love I have for the city. And I didn't know how my peers would react to me kneeling.

"But what I want everyone to know is that I've got nothing but love from white officers, black officers, everybody thanking me for kneeling to support George Floyd. Nothing but thanks."

"Sorry for getting emotional," he said, choking back tears.