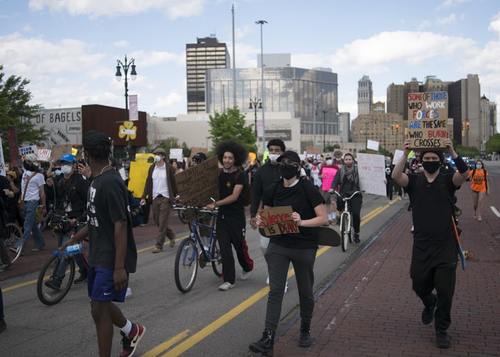 Activists and legal advocates are calling on Detroit officials to rescind a curfew and drop charges against demonstrators arrested in weekend protests, arguing many of the arrests were arbitrary and Detroit police were responsible for much of the violence.

“People were marching down the streets and at different points the police would charge into them or fire tear gas or rubber bullets and that’s where all the commotion was caused from,” said John Royal, president of the Michigan chapter of the National Lawyers Guild, which provides legal support for grassroots social justice organizations. “It wasn't caused from people attacking the police, which is the picture they’re trying to create.”

More than 250 people were arrested for disorderly conduct and curfew violations as peaceful protests against the killing of George Floyd in Minneapolis turned violent on Friday, Saturday and Sunday nights. Monday’s protest ended without incident, and Tuesday's resulted in the arrest of dozens of peaceful demonstrators out past curfew. Some were pepper-sprayed and taken to the ground.

The daily demonstrations in Detroit, which have included up to about 1,000 people, have been far less destructive than those in other cities, where buildings were looted and set ablaze. There's been limited property damage beyond the defacement of seven police cars, according to the department.

Some demonstrators have been seen throwing rocks and bottles at officers. Police say they’ve also been targeted with fireworks and railroad spikes. Two officers have sustained minor injuries. One man has been charged with allegedly trying to drive his car at officers.

An 8 p.m. curfew was instated Sunday to deter what police say was a trend of violence after dark.

But while police have blamed a small group of people for the destructive behavior, Royal says they’ve responded with indiscriminate force that hurts peaceful demonstrators too.

Rubber bullets and tear gas have been used to disperse crowds, often without warning, he said. Officers have also punched, shoved, tackled and beaten demonstrators with batons, according to legal observers and social media videos. Internal investigations have been opened into those whose actions may have violated policy, the department said.

Craig has said some of the controversial tactics were needed to quell the violence.

“When you have someone throwing, for example, this railroad spike, one could easily say that’s a deadly force incident,” he said at a Monday news conference. “The problem is when you’re talking about large numbers of people and it's thrown, you don’t know where it’s coming from. And an officer can’t use deadly force without the possibility of not acquiring a target … A better option is to use those non-lethal munitions to disperse the crowd so the attacks can stop.”

Royal, whose organization has made contact with more than 100 of those arrested, says he believes many peaceful protesters were arrested illegally in an effort to deter others from exercising their First Amendment rights. The overwhelming majority are charged with disorderly conduct and curfew violations. Just two face felony charges — which he points to as evidence of a lack of violence and destruction on the part of those arrested. Throwing a hard object, for example, can result in a felonious assault charge. 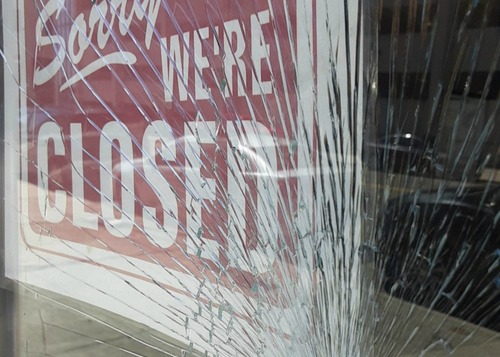 Royal said none of his clients' tickets detail any specific property destruction or violence.

“They were not necessarily arresting people who were destroying property or throwing things at police, they were arresting the people who were convenient,” he said. “The vast majority of people we’ve interviewed have never been arrested before. They were honestly appalled by the murder in Minnesota and they wanted to express how upset and angry they were about it … they weren’t there to cause trouble.”

He’s said the guild will likely request their charges be dropped when courts are reopened.

A number of police incidents have drawn scrutiny:

The department has encouraged people who’ve been treated inappropriately to file complaints.

“We do expect our officers despite the pressure they face on the front lines … to still conduct themselves in a professional way,” Craig said Monday.

Still, Detroit Mayor Mike Duggan has commended the department for a “beautiful” and “professional” response in the face of “provocation.”

Craig and Duggan have blamed the problems on a small, organized group of “outside agitators” they say are largely from the suburbs. The group was found to be “resupplying with cars delivering rocks and railroad spikes,” Craig said Monday. 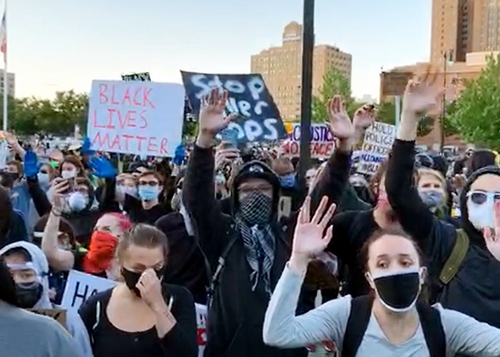 More than two-thirds of the demonstrators who were arrested over the weekend had suburban addresses on their IDs, police said. Over the weekend, Deadline Detroit photographers saw a young white woman break a glass door at Lafayette Coney Island — a move met with objections by other protesters. A white man spray-painted a number of buildings in Corktown, including a health clinic. This happened shortly after one of the protest’s black organizers urged allies not to “leave brokenness behind.”

Some protest organizers, like Meeko Williams of the Metro Detroit Political Action Network, have sought to distance themselves from anyone not behaving peacefully. But while they may agree with police that people unaffiliated with their movement have caused trouble, they say the “outside agitator” narrative has been overblown by officials in an effort to drive a wedge between activists.

“They’re trying to dissuade Detroiters from joining the rallies we’re having,” said Williams. “They’re sending a message to people in the neighborhoods, ‘Don’t come down to police headquarters and join with these people because they’re not from here — join with us.’”

Legal observer Curtis Renee said it overshadows the fact that the demonstrations have been largely peaceful.

“The narrative that was coming up is that these people that are not from the city are destroying the city and vandalizing, but vandalism is not happening,” she said. “Regardless of where people are from, whether they’re standing in solidarity or if they’re a black person protesting, these are peaceful protesters.”

A fifth day of protests was beginning Tuesday afternoon at Detroit Police Headquarters.

Williams and a coalition of activists have separately scheduled a protest against the curfew for 6 p.m. Wednesday outside of the mayor’s home at the Manoogian Mansion. They’re also calling for an end to the arrests of peaceful protesters.