► Update: A review panel will be set up to recommend steps for improving safety in Detroit public schools, board members decided. They'll also create an oversight committee to monitor the district police department, Chalkbeat reports.

Board President Iris Taylor made the announcement during a school board meeting Tuesday night.

Armed officers assigned to Detroit public schools create more harm than safety, in the view of an education advocacy group that led a protest Monday outside the district's Fisher Building offices.

Eleanore Catolico and Koby Levin report at Chalkbeat Detroit on the effort and its citywide voices:

[The group] recently launched a campaign for the district to divest in school police. On Monday, dozens of protesters gathered ... to call for a plan to shift funding from the school police force to guidance counselors, restorative justice programs, and a committee that would create a districtwide “safety plan.”

Protesters said the district should form a committee with community members to develop a safe plan for dismantling the district police department. They also called for the district to release data on spending and misconduct of district police, arguing that police officers in schools don’t support student learning. 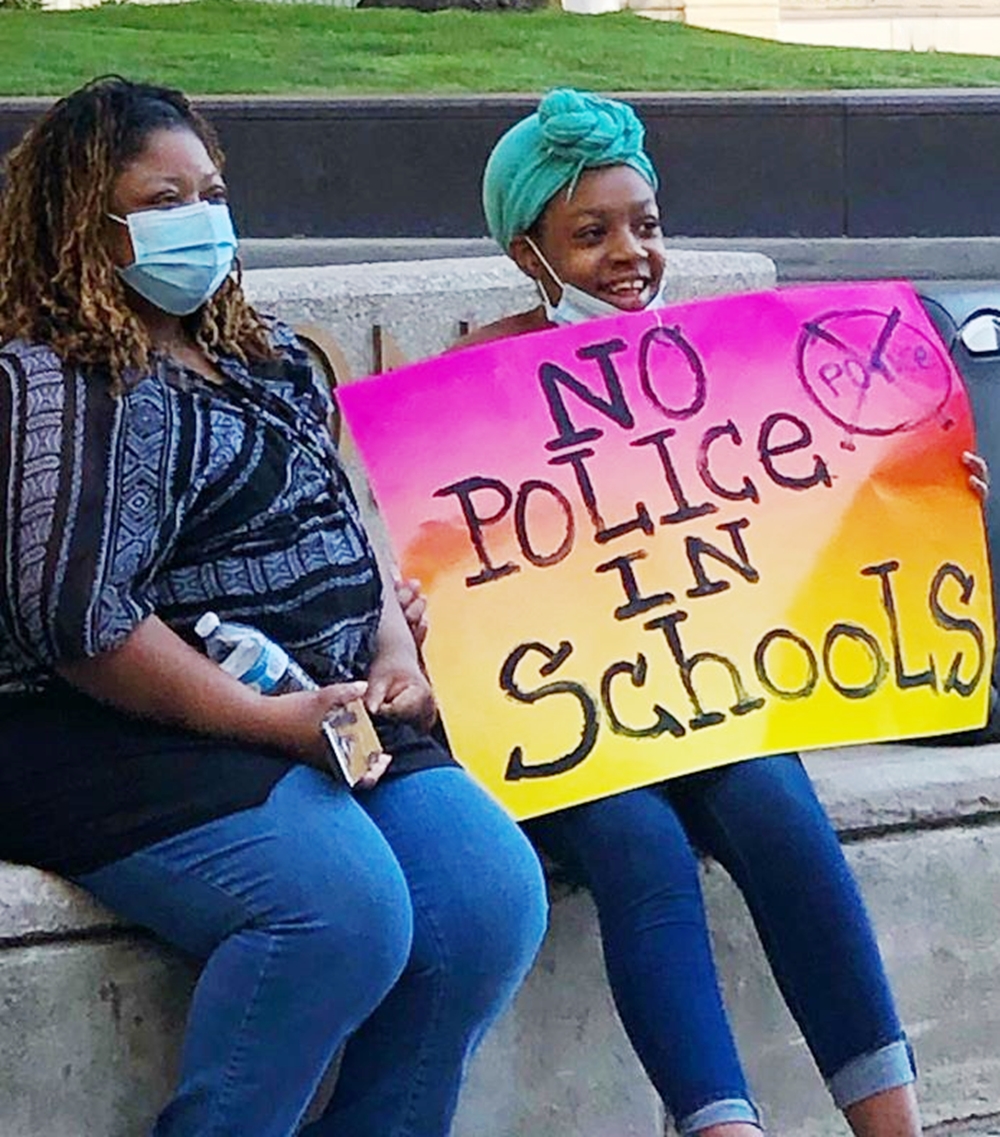 Highlights of the proposals are in a slide below this post.

Supporters include Toriè J. Anderson, a master English teacher since 2015 at Davis Aerospace High School, who posts that instead of district police cars, "I see more laptops, more In-school social workers, better pay for teachers, art programs, music programs. My question is: If we have DPD. do we really need a DPSCD police force?"

"I've seen several incidents where DPSCD police handcuffed and arrested students over minor incidents. At the same time, we only had one guidance counselor."

The organizing collective, named 482Forward, posts that it's "committed to ensuring that all Detroit children have access to an excellent education, regardless of their race or socioeconomic status. Together, we are building power to make systemic change and win educational justice for our communities." 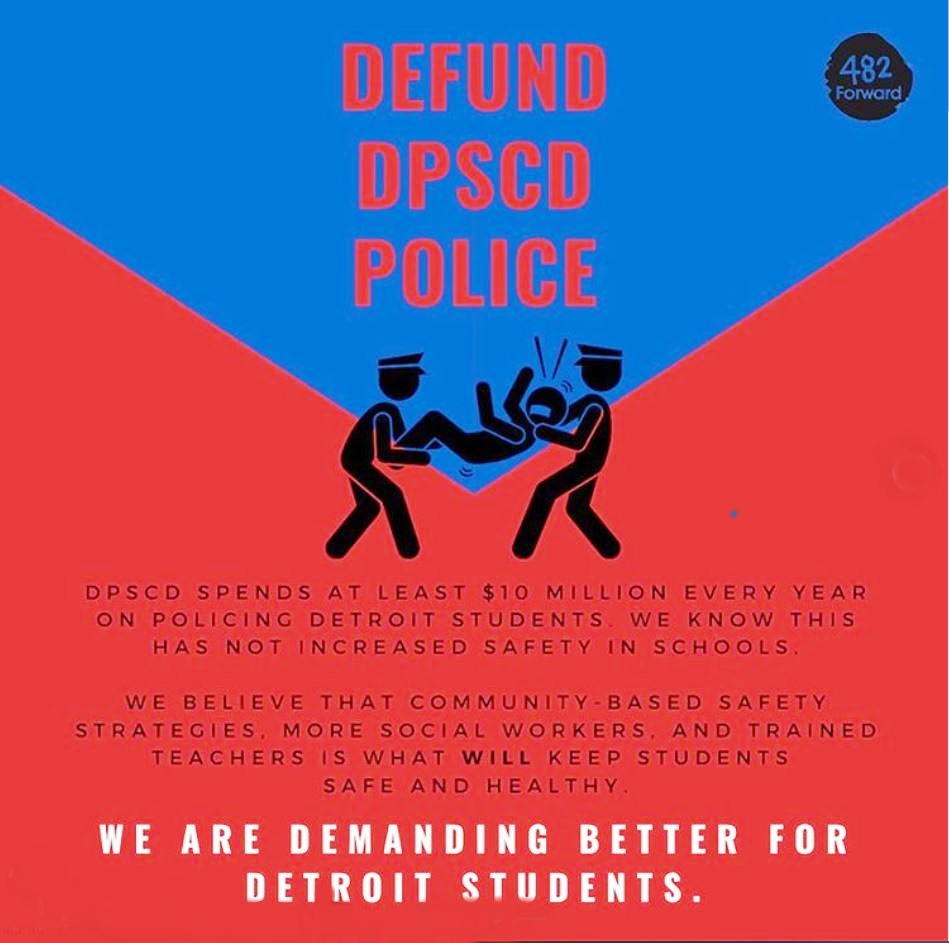 The current hot button amid nationwide racial justice discussions is whether a dedicated police department is the best way to serve Detroit pupils and staff. A $5.6-million command center opened nine years ago.

DPSCD spent over $15 million last year on policing, surveilling and criminalizing Detroit students. As of 2015, DPSCD was spending less than $1 million/year on social workers.

We believe that community-based safety strategies, more social workers of color from our neighborhoods, and training for all adults and youth in proven safety strategies is what will keep our schools safe and healthy.

Goals include getting the seven-member board to invest at least half of the DPSCD Police and security budget "in trauma-informed care by June 30" and to "commit to fully defunding the DPSCD Police Department by June 2021." (Backers can join the call here.)

"The district is always willing to discuss how officers can strengthen their relationship with students and the greater community,” Wilson said. “However, if the district did not have its own department and safety issues surfaced that required officers at a school, then the district would need to rely on traditional officers to address matters in schools without the benefit of previous relationships with students, faculty and school leaders."

"Horrific incidents can happen between outside police and students." 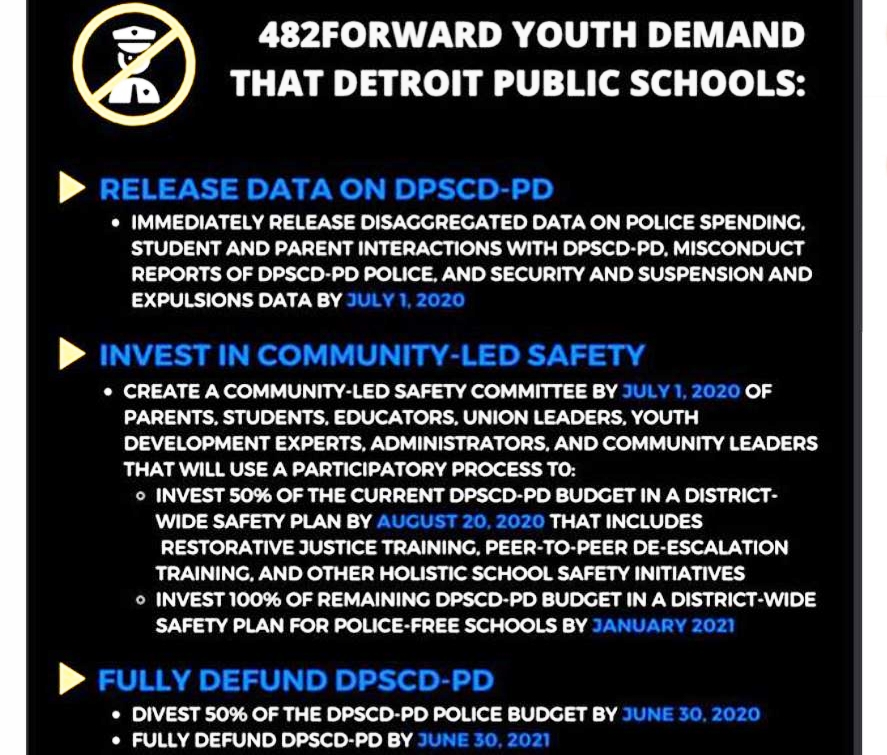