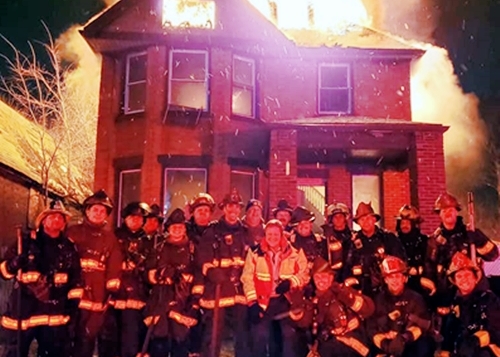 The owner of a Detroit home firefighters stood before for a controversial photo last year is now suing the city, accusing the firefighters of gross negligence that cost him money and caused emotional distress.

The suit, filed on behalf of Deonte Higginbotham in Wayne County Circuit Court, says the home at 611 S. Green St. in Southwest Detroit was empty for renovations with more than $100,000 of work put in.

It names the city, fire department and department members involved in the May 2019 incident.

"The outrageous image of seventeen white firefighters posing and smiling while the black families (sic) fully engulfed in occupied home burned to the ground made international news," the complaint says. "The photograph seen around the world is symbolic of white law enforcement's abject disregard for the welfare of black American families such as the Higginbothams'."

Firefighters had posed to honor a retiring battalion chief.

The suit seeks unspecified damages. According to WXYZ, a protest over the issue is scheduled for 4 p.m. Wednesday in front of Detroit City Hall.