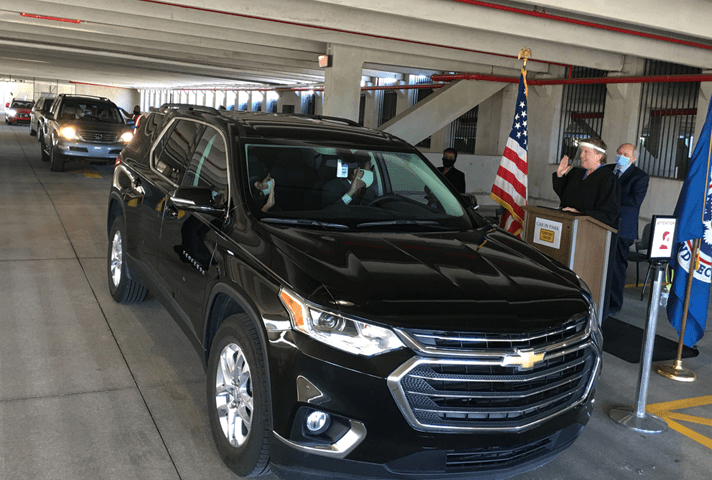 It is the Motor City, after all.

A press release from the U.S. Courts reports on the innovation in the traditional swearing-in ceremony, deployed this week in Detroit. The ceremonies are taking place in a parking structure at the U.S. Citizenship and Immigration Services field office.

The process, which was modeled on drive-through Covid testing in Detroit, goes like this: Oath-takers enter the parking structure, are checked in by USCIS employees clad in protective gear, and then drive on to a podium where a federal judge swears them in. They need never leave their cars.

The new process gets the job done, but also eliminates the ceremonies at the federal courthouse downtown. Many new citizens attend in their finest clothing, sometimes traditional dress, and take the oath as a group. But one judge looks on the bright side:

“It is always a pleasure to swear in new citizens,” said U.S. Magistrate Judge Elizabeth Stafford, who swore in the first group of immigrants in a June 4 drive-through ceremony. “They are so grateful to become Americans and eager to contribute to the community.

"I found the drive-through citizenship ceremony to be especially meaningful because I witnessed the dedication of the USCIS professionals to innovate so that they could continue to serve immigrants during the pandemic. During this challenging time, seeing such humanity from both the new citizens and the professionals who serve them was nothing short of inspiring.”