Detroit-area bars and restaurants are open, but some workers are skittish 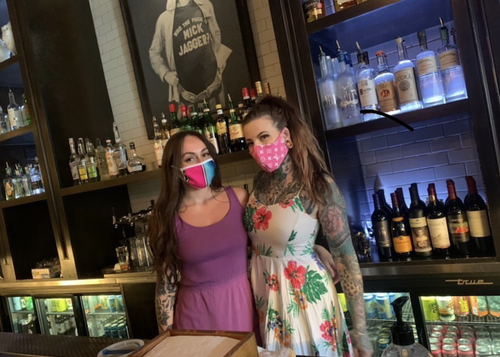 By Dan B. Jones

On a recent late-spring night, revelers formed a socially distant line stretching half a block from the front door of Como’s Restaurant in downtown Ferndale.

Next door, Danny’s Irish Pub had a full patio of patrons who appeared to be enjoying a beery good time.

Nearby, the taco-and-tequila tavern Imperial looked to be near the mandated capacity of 50 percent. Smiling guests sat across from one another, shifting their Plexiglas dividers to accommodate their fare.

As pleased as patrons seem to be, many service workers don't share the same enthusiasm.

Kayla LeRoy, a restaurant worker with a wide breadth of experience, can be found behind the bar of the Public House, a Ferndale watering hole and dining spot on W. Nine Mile Road, long dark hair framing her masked face.

Public House has opened for full service and LeRoy, who describes herself as “immunocompromised,” said of the prospect of contracting Covid that “I'd be lying if I said it doesn't scare me. However, I'm mostly worried about the welfare of others. I would hate to think I was part of the problem.”

“It's a complicated situation. People are hurting, businesses owners and employees alike. It's a hard process to navigate and difficult at times,” she admits, alluding to the most recent data from the Michigan Restaurant and Lodging Association that indicate the industry has lost about $8 billion since March 16, with 1,000 restaurants having shuttered permanently.

“I try to focus on the positive. My main goal is [a] guest’s comfort level and safety. I think most people visiting restaurants when they opened knew they were putting themselves in a susceptible situation in the first place.”

Saying no has impact

Not everyone in the industry feels as charitable as LeRoy. Sarah, who spoke on the condition we not use her last name, is a bartending veteran with 14 years' experience. She has declined to return to the Detroit bar where she's worked for eight years, choosing instead to remain as one of the 350,000 Michiganders out of work in the hospitality industry.

That means she “refused a position” and no longer can collect state unemployment benefits or money through the Federal Pandemic Unemployment Compensation program.

Although she says she feels a certain amount of guilt watching her co-workers return without her, and experiences some empathy for her employer’s situation, “This ‘phased reopening’ approach makes absolutely no sense," she said. "Let’s see if those rats can make it through the maze intact, then we’ll let loose the next ‘phase?’”

“Servers get a fraction of the minimum wage guaranteed hourly, assuming they’ll make the rest up in tips. At a mandated 50-percent capacity, this assumption is negligible," she said. "So basically my colleagues are accepting more risk for less money. Fucking Opposite-Land.”

Bartending is dicey right now, and exposes fault lines of class, Sarah said, adding, “One major reason I can’t return to bartending in the Covid era, is I just can’t smile at a person that devalues my life and the lives of my loved ones as much as their actions suggest. Every customer that comes through that door is basically saying to me, ‘I give zero fucks about your welfare. I want to have a party and if you don’t want to host it, there’s the door to the poorhouse.’” 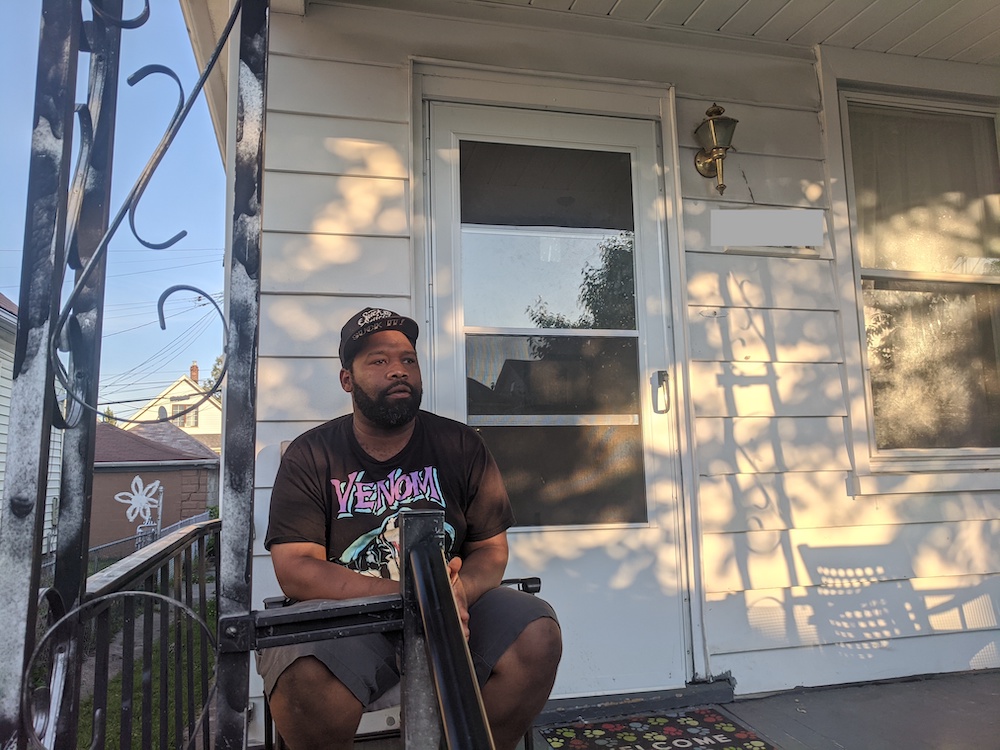 DuJuan Robinson: "I feel like it's too early to be opening." (Photos: Dan B. Jones)

DuJuan Robinson, a longtime restaurant cook and sometime kitchen manager, had been taking an extended break from the industry even before the health crisis began. But Robinson, who in the past has been involved in Restaurant Opportunities Center United (a national group that organizes and advocates for hospitality workers’ rights and welfare), understands the complexities of the struggle and still has pointed opinions that seem simpatico with Sarah’s.

“Dude, I get it,” he said, sitting on his front porch sipping a White Claw, “people miss eating out, miss having people serve them.” However, he thinks it’s premature to be welcoming patrons back into restaurants: “I feel like it's too early to be opening up, even if I were back there [in the kitchen], the servers are running in and out, so the exposure is still there.”

Robinson agrees with Sarah, saying that class and entitlement cut deeply and are vital concepts in understanding some of the problems he is describing. “The word server is from the word servant. The French bourgeois wanted to pretend they had a servant for a couple hours. I don’t got money to pay you for a week, but come make this sandwich for a couple hours,” Robinson says with an amused tone, leaning back in his chair.

“A seven-hour shift wearing that mask over a four-burner so you can have a sandwich? You better just grab a couple pieces of bread. I am sorry,” he says, looking not at all sorry.

While there are a number of state mandated rules for bars and restaurants to open safely --  including use of PPE, limited capacity and social distancing -- the risks involved in re-opening a dining or drinking venue are magnified indoors, according to the CDC.

And in some cases, customers have refused to comply.

"It’s true," says LeRoy at the Public House in Ferndale. "We have had guests who have chosen not to dine because we require you to wear a mask to enter and while moving around the restaurant. Plain and simple, no mask no entry. Some guests don’t agree, which is interesting since you have to wear a mask to enter grocery stores. Not sure why the logic doesn’t transfer for some."

For precisely this reason, some bars, such as the venerable Detroit watering hole of the Old Miami, have chosen to only allow patrons onto their patio and back yard.

On a recent night in the Miami’s expansive back yard, Ray DeLoof, an experienced industry worker and bartender/manager worked the open-air bar. To enter the fenced yard, a mask was required and enforced by the tattooed bouncer. A touchless hand-sanitation station sat nearby. DeLoof and the bar-back, both clad in masks, sanitized the wooden bar top between patrons.

DeLoof, whose broad smile is evident even behind a mask, doesn't mince words. Though he is back to work, he hasn’t been immune to the pressures of the past few months and certainly felt some ambivalence. “My level of concern has fluctuated from considerable anxiety to peacetime calmness. But I’m feeling more unburdened lately. The region is showing signs of recovery and our medical centers are more prepared for spikes in hospitalizations,” he said.

The bar's opening plans were collaborative.

“The Old Miami opened up June 8, the first day possible for Southeast Michigan. We called a staff meeting to discuss and create a strict plan with regards to the state guidelines and our own comfort and a decision was made to only open our outdoor bar and huge patio. No service inside. Only restrooms,” he explains.

Though he said he feels comfortable with the safeguards, DeLoof is noticeably grimmer about some neighboring places: “In comparison to what I’ve witnessed and heard about locally and elsewhere, I think we are displaying an abundance of caution.”

The interruption in work schedules has taken a toll on some, causing DeLoof to “worry about the collective level of anxiety and depression that has accompanied this pandemic.” 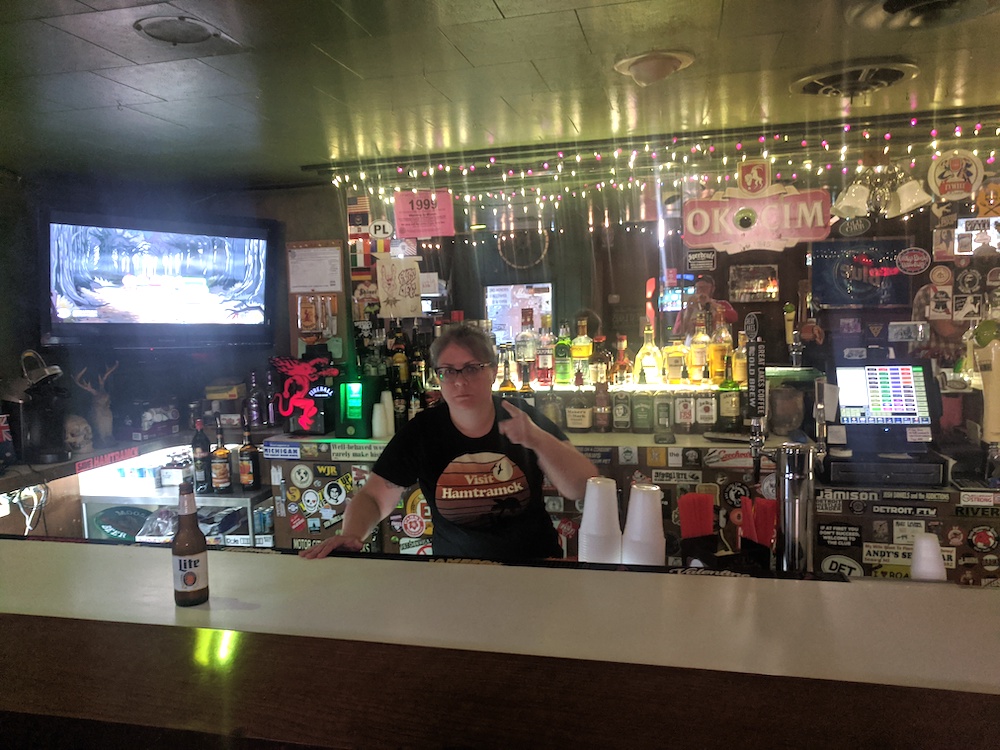 Katie Palonis: "Making sure everyoine is safe is my top priority."

Some see if differently. Katie Palonis, a Detroit public school teacher and bartender of 14 years, said returning to work at Hamtramck's Whiskey In the Jar on Yemans Street has helped ease some of the pain associated with the shutdown of her school.

“Honestly, getting back behind the bar has helped me cope with not seeing my [students] finish out the year. I’m really sad I didn’t get to have one last goodbye. I’m missing them a lot.”

Getting back to the bar, Palonis says, has been good for her. “Nah man, no anxiety here,” she enthuses.

Of course, she says, that doesn't mean she's not vigilante about safety.

"We have hand sanitizer available for everyone, cleaners in the bathrooms for patrons to use if they need to and I make sure to wipe down and spray tables, chairs, door knobs, all that stuff throughout my shift. I have been taking the guidelines very seriously, because again, making sure everyone is safe is my top priority. ”