'In the Whirlwind:' Gretchen Whitmer talks with NY Times Magazine about a relentless year

An in-depth profile gives readers beyond Michigan a sense of why Gretchen Whitmer gains admiration this year among many state residents, while also becoming a lightning rod for attacks.

She's the subject of a New York Times Magazine article, posted Thursday and headlined "In the Whirlwind" for Sunday's print version. Staff writer Jonathan Mahler interviewed the governor by phone repeatedly since late April because "I wanted to understand what it was like to govern through a global pandemic." He tweets today: "She was remarkably open."

Newcomers to this state's dramas will learn how bad news flooded into Whitmer's second year in office, starting with Covid-19 in late February, followed by armed protesters in the Capitol on April 30, Midland flooding May 19 and racial justice protests around the state in the past month.

By the beginning of the third week in May, Whitmer was dealing with a public-health crisis, an economic disaster, a hostile Legislature and an angry white protest movement.

Then the dam broke. 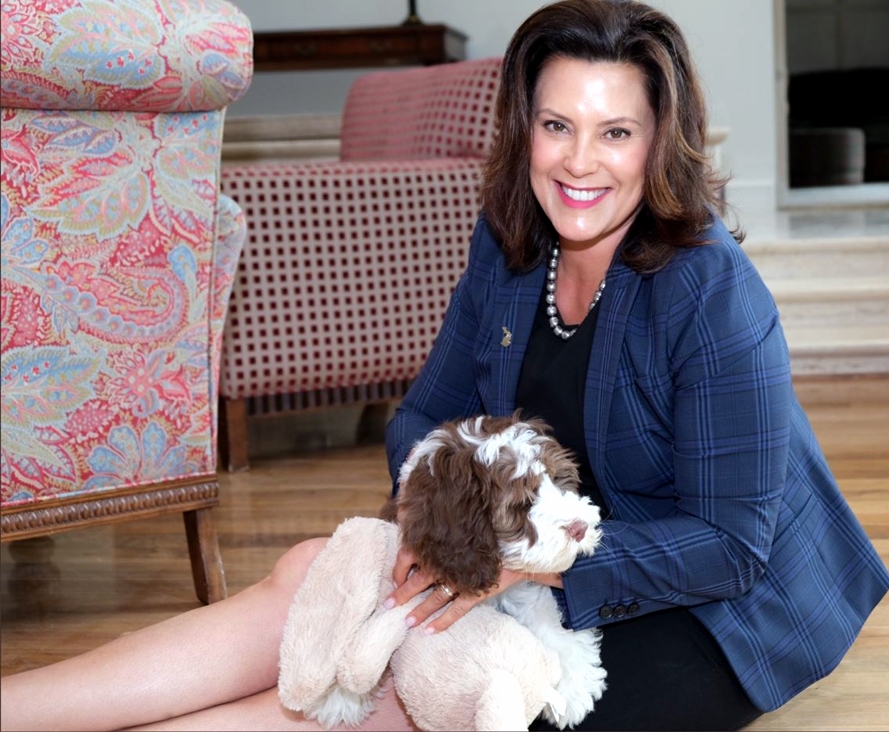 The governor with "First Pup" Kevin, a Labradoodle who makes a cameo appearance in the magazine. (Photo: Twitter/Gretchen Whitmer)

The 6,700-word narrative also has insights for home-state readers as Mahler describes her personality and leadership style.

The pandemic required ... minute-by-minute, seat-of-the-pants, lives-in-the-balance decision-making for which there was no model or precedent. ...

I have been talking to Whitmer every couple of days; our conversations evolved as she found herself confronting not only a public-health crisis but an economic crisis, the catastrophic collapse of a major dam and a historic reckoning with racial inequality.

She was usually in her living room at the governor's residence in Lansing when we spoke — she set up her office there because it had the best Wi-Fi reception in the house — though when the weather was good she would occasionally step outside and walk around the lawn. Some days, I could hear her Labradoodle, Kevin, playing with a squeaky chew toy in the background.

Whitmer is not naturally introspective. Recounting the almost incomprehensibly consequential decisions she was making on a daily basis, she rarely lingered on how she felt or the magnitude of the moment. She was more inclined to review events and discuss strategy, approaching it all with the same practical mind-set and vocabulary she brought to more manageable governmental challenges like fixing potholes.

The effect wasn't necessarily stirring — there was no soaring rhetoric about the need to rise to this historic challenge — but it was oddly reassuring; she was channeling panic into process.

The fact that Michigan's especially busy governor carved out interview time for The Times "every couple of days," including right after a helicopter tour of Midland, reconfirms her intrerest in an elevatred national profile during a presidential election year.

The wide-ranging intrerview includes reflections on water shutoffs for nonpayment, Flint's water crisis and participation with one of her two teen daughters in a Woodward Avenue march June 4 from Highland Park toward Detroit:

"There's a lot of pain across this country," she said when I asked what had inspired her to go to the protest. "This is a righteous cause and I wanted to be there in person."

There's much more worth a look, including 10 photos and Whitmer's reply to a wrap-up question about how she defines success in 2020.