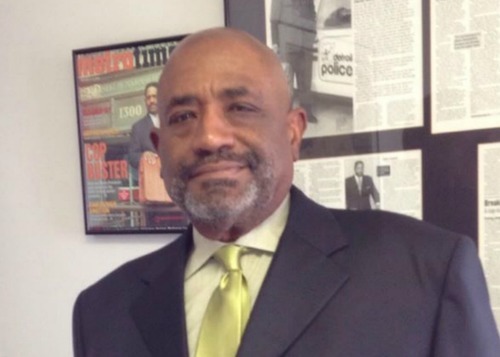 Ex-Detroit police officer David Robinson left the department to become a civil rights lawyer and bring cases against it.

Given the fraught relations between police across the country and the communities they serve, it’s perhaps unsurprising that this week’s Detroit police plowing of demonstrators was seen through two distinct lenses.

On one side were Police Chief James Craig and Detroit Mayor Mike Duggan, who more or less said the demonstrators were asking for it by crowding around a police SUV and climbing on its hood. On the other were demonstrators who charged officers overreacted to their brief encounter, meeting their chants with excessive force that could have cost lives.

Sunday night’s incident in Southwest Detroit has drawn national attention — one of the latest acts of apparent police brutality in a series of protests aimed to combat it.

Police in two separate vehicles rammed two groups of demonstrators after trying and failing to redirect them during a march. Craig and Duggan said the officers felt threatened, indicating that, if put in their position, they might have done the same. Demonstrators pounded the police vehicles and smashed a rear windshield, Craig said, though protesters maintain they only did this when the SUVs started driving into them, and videos appear to corroborate their claims.

The department has launched an investigation that will emphasize finding the people who got on the hood, Craig said Monday.

The tenor of Sunday night’s event, which included 20 activist groups from across the city, was different from the nearly four weeks of peaceful demonstrations that preceded it, he said. Some demonstrators allegedly had hammers, though Craig couldn’t specify how officers obtained that information. They’d also been disrespectful toward a police commander at one point.

But none of those actions, nor the crowding of a car, warrant the use of potentially deadly force, says civil rights attorney and former Detroit police officer David Robinson.

Robinson worked as an officer and DPD attorney for 13 years before leaving the department to try cases against it, meaning he's one of few experts who may be capable of seeing confrontations between police and civilians from both sides.

We’ll now give him the floor.

What was your initial reaction when you saw what happened?

If I was in that car, I would never have done that ... for fear that I would kill somebody, to be honest. It did not appear there was an urgency to drive through people like that officer did. If there’s a chance of hurting somebody seriously, that was improper.

Why was it improper?

It’s a use of force. Those cops are not being attacked. The protesters were shouting, you know, “fuck the police,” but the cops were not being physically attacked. Nobody had anything in their hands … what officers saw was just signs in people’s hands — not any sort of weapons or anything that could have done damage even to that car. So that was a situation that called for restraint and an exercise of discretion. [Officers may lean on] the fear factor of “anything could have happened,” but that’s never good enough in my estimation because anything could always happen. There was no imminent threat, and using a car against human skin clearly is a potential for deadly force.

What criteria has to be met for officers to be permitted to deploy deadly force?

There has to be an imminent threat or a significant threat of harm to your life or the life of somebody else. That clearly wasn’t there. “Imminent” means, [for example, a] gun is pointing at you and the finger is on the trigger. These people were talking shit and crowding around a car and climbing up on it, but that was not an imminent threat, no damn doubt about it.

What other options did police have?

What was the urgency? I could see if there was a guy pointing a gun at them, sure, run them over. But that’s not what was happening. They weren’t even pointing fingers.

And when you think about it, when the car outran the crowd that was behind it and [the men were still on the hood], then they could have stopped, slowed down, gotten off the hood or forced them off the hood and arrested them. But they drove through the people.

Craig said officers thought they were being shot at when the back window was broken, could that justify the use of potentially deadly force?

Craig mentioned the crowd earlier in the night appeared agitated and that a door handle was grabbed. What if officers thought someone was trying to gain access to the car?

Are you surprised the chief and mayor defended this?

You gotta look at it in the context of all that is surrounding us right now. This is a different type of atmosphere. The dimensions of what we’re facing are rare and result in rare responses. Things are much more polarized.

Chiefs of police don’t want to be criticized for not standing up for the officers because the first thing a cop will do is throw his hand cuffs down, like they did in Buffalo, and say well we’re going to quit because you’re not going to support us, even though we fucked over this guy.

(He also says the city’s defense may in part be aimed to shield it from legal liability) They want to engender the sympathy of a potential jury pool and judge.

Going back to the “fear factor.” These demonstrations have been peaceful for a month. But Craig said Sunday had an element of agitation he says he saw in May when there was unrest during the first three nights. What should have informed the police response?

This is another one of the problems with police. The training is designed to minimize their thinking process. It’s designed to be rote so that it produces an automatic response. To analogize it to a German Shepherd, the K-9s are on one speed. It’s either heel or attack, and between heel and attack there’s no thought process. And when you look at cops, and they’re going after somebody, they’re just like German Shepherds.

It's purposeful, it’s designed like that. It’s this warrior mentality of, “I’m going to make it home tonight, regardless of what I might do to you. My life is more important than your life.”

The police narrative seems to have prevailed in media coverage of the incident. One paper initially reported things took a turn for the dangerous when protesters surrounded the vehicle, even though crowding is not necessarily dangerous, driving into people is. And many commenters on social media also felt the police response was warranted. What accounts for the disconnect between their views and yours?

I’m often frustrated as a lawyer and a former cop when a client (in a police misconduct case) gives me the story of what happened and I can tell in the back of their mind they’re always asking themselves, “did I actually do something wrong?” And that's the psychological handicap citizens have because of the way in which society has held police officers up to this superhuman standard.

And the courts have gone so far that they’re as much a part of the problem ... they are so swayed by these stories of danger and suspense that police can spin that tale — just like Craig, about — “well we heard there was somebody wielding a hammer somewhere.” So that’s that fear factor and that makes people say, “Oh, OK that’s right, we don’t want to do anything to jeopardize that cop’s life or safety.”

But you sign up for the job to take a risk. Not to lose your life, but part of the responsibility is that’s the potential that you get injured. Think of a garbage man. He doesn’t sign up for a job because he wants to smell good while he’s working.