Lapointe: Detroit's beloved Fist was once as troubled as Confederate generals are now

In 1986, shortly after the Joe Louis “Fist” monument appeared near Detroit’s city hall, somebody defaced it with gold, spray-painted graffiti that said “TKO” – technical knockout. 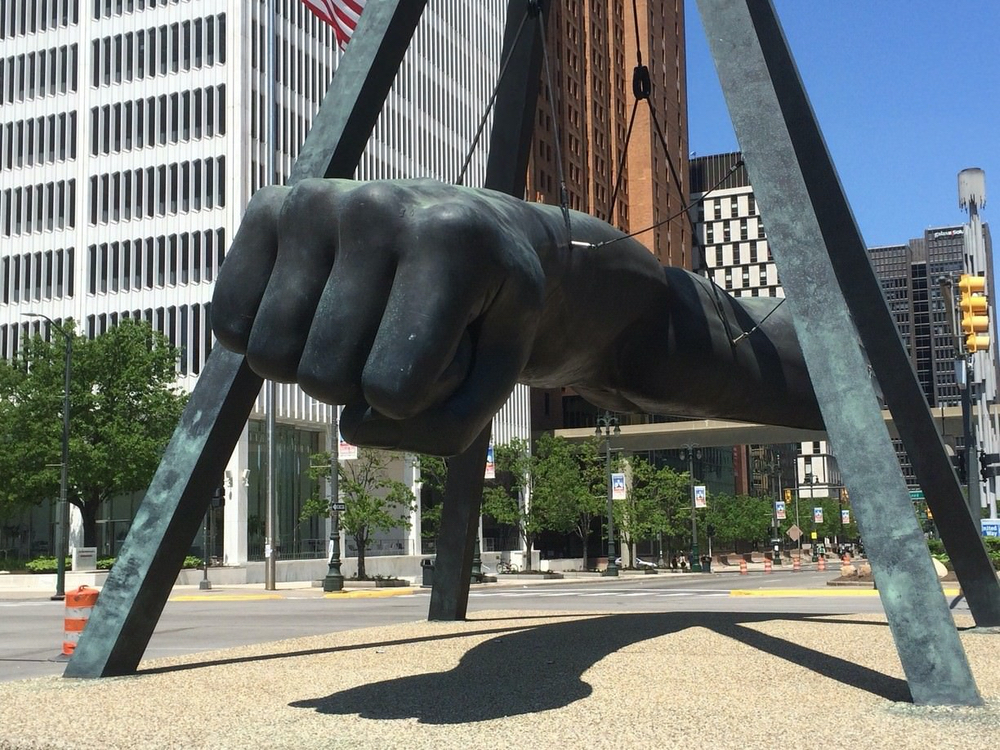 Louis, the Brown Bomber from Black Bottom, was boxing’s heavyweight champion during part of the Great Depression and all of World War II. He remains the patron saint of all Detroit fighters.

The mayor then was Coleman Young, a childhood acquaintance of Louis, who also named a hockey arena after Louis. I asked Young whether he might assign security at Woodward and Jefferson to protect the Fist from vandals.

“I hope it won’t be necessary to put security around a monument,” Young told me, exasperation in his voice. Critics already wanted The Fist relocated somewhere else, but Young said: “I have no plans to move it . . . I have no problem with it.”

Monuments attract vandals. Currently, Confederate monuments are being defaced and removed as the Black Lives Matter movement swells across the country. In 2004, the Fist drew a splash of white paint from two vandals with a racial chip on their shoulder.

After two white Detroit police officers were killed on duty, the vandals drove up to the Fist in a pickup truck, threw white paint on it and left photographs of the two dead cops along with a message: “Courtesy of Fighting Whities.”

The lawyer for one of them suggested hostile undertones to the Louis sculpture, a gift from Sports Illustrated magazine to the Detroit Institute of Arts.

“If it’s a monument to Joe Louis,” he said, “where is the boxing glove?”

Young, the city’s first Black mayor, knew as well as that lawyer that sometimes a fist is more than just a fist. The monument – outside what is now called the Coleman A. Young Municipal Center – was and is an 8,000-pound symbol of African-American political power.

The backlash at the time also suggested that the clenched fingers sent a hostile civic message to Detroit’s suburbs, to Canada across the river and to the entire outside world.

Thankfully, despite many recent demonstrations downtown and the removal of at least one monument near it, The Fist is no longer a target of racial animosity. John Roach, spokesman for Mayor Mike Duggan, said: “I’ve not heard of any recent vandalism of The Fist or any added security measures.”

(Although he didn’t mention it, it is well-known that much of downtown’s important places are now monitored by high-powered video cameras with screens in police headquarters. They can zoom in on the nose hairs of anyone they care to watch.)

Who's next? The 'Georgia Peach?'

Down the street from the Fist, the city did remove the bust of Christopher Columbus at Randolph and East Jefferson.

“We put the Columbus statue in storage,” Roach added in an email, adding that the mayor wants to have a community conversation on what to do with it. The bust of the European explorer – blamed for the genocide of Native Americans – had stood there 110 years.

Where might all this lead? When Comerica Park reopens and fans are allowed in after the Covid-19 pandemic, will someone deface or try to remove the statue of Ty Cobb which stands in the outfield alongside several other Tigers greats?

Though Cobb was one of baseball’s greatest players, he was also “the Georgia Peach” and his racial animosity toward African Americans reflected the extreme Caucasian perspective of his Dixie-American cultural heritage.

This statue stuff can be serious all over the world.

In 2001, in Afghanistan, the Taliban destroyed a poair of 1,700-year-old, sandstone statues of Buddha, condemned as idols by Taliban leader Mullah Omar. The tallest was 174 feet high. After failing to bring them down with anti-aircraft and tank fire, the Taliban drilled holes, placed dynamite and blew them up.

These racial, tribal and religious grudges can cut like a double-edged sword. After attacking symbols of people, how easy is it to justify attacking real people? All this could get worse before it gets better, especially with a president who pushes people’s race buttons.

Perhaps we should all take a deep breath, relax our fingers and unclench our collective fists.