LeDuff: It's Independence Day; do you know your rights?

So you got rights. But do you know your rights?

Like the 10 Commandments, few citizens seem to have them at their mental command. 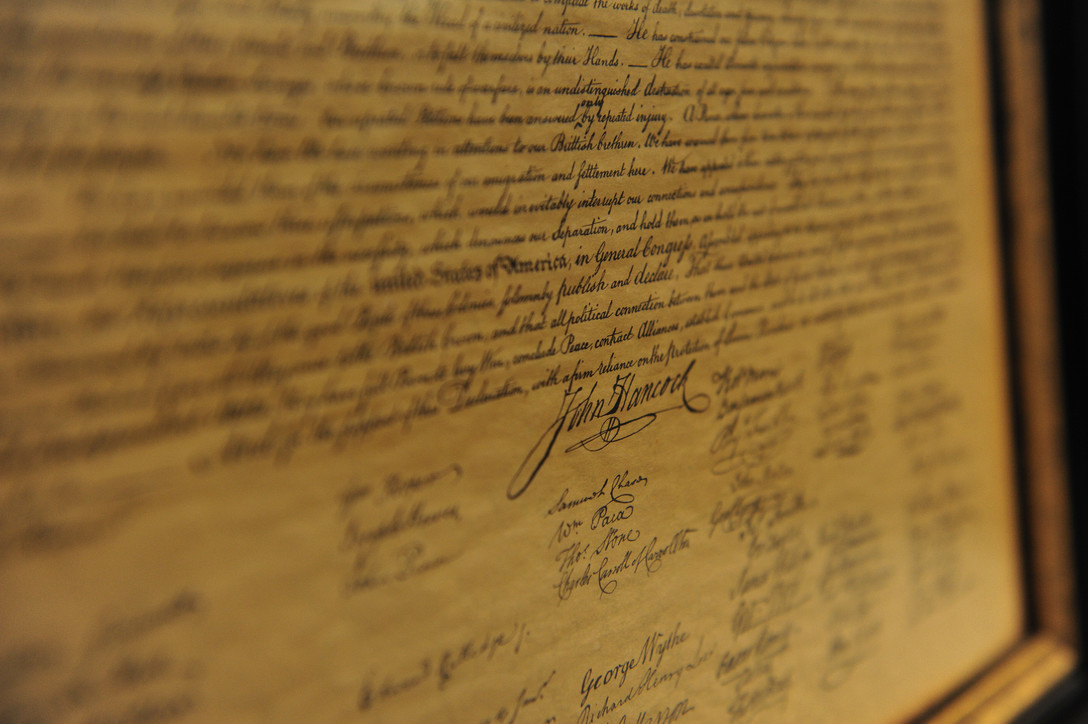 The Declaration of Independence (File photo)

The Bill of Rights are the first 10 amendments of the Constitution, which lay out the basic freedoms and due processes of law guaranteed to every American.

In the spirit of the holiday and the times, I have put together a cheat sheet of the Bill of Rights – their exact verbiage – followed by a regular-people translation to help any jailhouse lawyer commit them to memory.

It is important to first consider the preamble to the Declaration of Independence, the signing of which is commemorated on July 4. In it is one of the most powerful sentences ever written in the English language. And it provides the basic argument of the origins of your rights:

"We hold these truths to be self-evident, that all men are created equal, that they are endowed by their Creator with certain unalienable Rights, that among these are Life, Liberty and the pursuit of Happiness."

Our basic rights come from the Almighty, it says. And the Almighty is never wrong. Except sometimes.

“When the founding fathers wrote “men,” they meant “men,” says Robert Sedler, distinguished professor of constitutional law at Wayne State University. “In fact, the right to vote was extended only to white property-owning men. Blacks could not vote. Women could not vote. White men without land could not vote. So from the beginning we have trouble.”

The last state to ban the property requirement was North Carolina (1856).

The right to vote for African Americans and other people of color (except Native Americans) came with the 15th Amendment (1870).

The last racial group to claim its right to citizenship and the vote were, ironically, Native Americans, the first people (1924).

It's been a long, often ugly journey toward the pursuit of Life, Liberty and Happiness for all. I trust we can get there. We must. And it is the rule of law, and its equal application, that will get us there.

Congress shall make no law respecting an establishment of religion, or prohibiting the free exercise thereof; or abridging the freedom of speech, or of the press; or the right of the people peaceably to assemble, and to petition the government for a redress of grievances.

Translation: I got the right to shoot my mouth off.

A well-regulated militia, being necessary to the security of a free state, the right of the people to keep and bear arms, shall not be infringed.

Translation: I got the right to shoot my gun off.

No soldier shall, in time of peace be quartered in any house, without the consent of the owner, nor in time of war, but in a manner to be prescribed by law.

Translation: No soldiers in my house.

The right of the people to be secure in their persons, houses, papers, and effects, against unreasonable searches and seizures, shall not be violated, and no warrants shall issue, but upon probable cause, supported by oath or affirmation, and particularly describing the place to be searched, and the persons or things to be seized.

Translation: No cops in my house, unless you got a warrant.

No person shall be held to answer for a capital, or otherwise infamous crime, unless on a presentment or indictment of a grand jury, except in cases arising in the land or naval forces, or in the militia, when in actual service in time of war or public danger; nor shall any person be subject for the same offense to be twice put in jeopardy of life or limb; nor shall be compelled in any criminal case to be a witness against himself, nor be deprived of life, liberty, or property, without due process of law; nor shall private property be taken for public use, without just compensation.

Translation: I don't got to say shit.

In all criminal prosecutions, the accused shall enjoy the right to a speedy and public trial, by an impartial jury of the state and district wherein the crime shall have been committed, which district shall have been previously ascertained by law, and to be informed of the nature and cause of the accusation; to be confronted with the witnesses against him; to have compulsory process for obtaining witnesses in his favor, and to have the assistance of counsel for his defense.

Translation: I want to talk to my lawyer.

In suits at common law, where the value in controversy shall exceed twenty dollars, the right of trial by jury shall be preserved, and no fact tried by a jury, shall be otherwise reexamined in any court of the United States, than according to the rules of the common law.

Translation: If it's worth 20 bucks, I'll see you in court.

(Also known as the Slip-and-Fall amendment)

Excessive bail shall not be required, nor excessive fines imposed, nor cruel and unusual punishments inflicted.

Translation: I get bail. And until I do, I get three meals and a COVID mask.

The enumeration in the Constitution, of certain rights, shall not be construed to deny or disparage others retained by the people.

The powers not delegated to the United States by the Constitution, nor prohibited by it to the states, are reserved to the states respectively, or to the people.

Translation: If it's not written down, the federal government has no right to it.