'Driving while Black' billboard goes up near Livonia 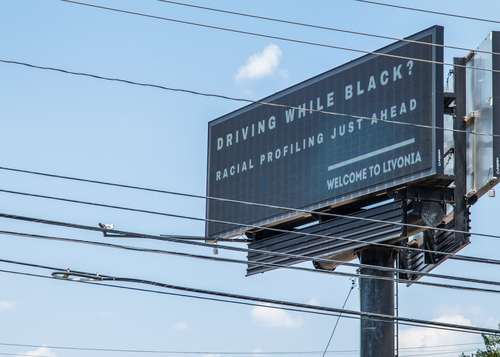 A new billboard near Livonia makes a sharp statement about that city’s history of racial intolerance, warning drivers of “racial profiling just ahead.”

The digital message at Telegraph Road near I-96 was purchased after a Facebook group, Livonia Citizens Caring About Black Lives, reportedly raised about $1,800.

Livonia shares a border with Detroit and is 90 percent white. The message technically sits in neighboring Redford because Livonia doesn't allow billboards.

Racial profiling in traffic stops is a persistent problem in Detroit's majority-white suburbs, according to a report by the Detroit Justice Center (DJC). The legal advocacy group says police departments have incentive to pull over people they suspect may be low-income and driving without insurance. An estimated 60 percent of Detroit drivers are believed to lack insurance due to exhorbitant premiums.

In Oakland County, for example, the DJC reports that data shows Black people are disproportionately arrested at high rates and every single judicial district. Across Michigan, it reports that half of all criminal prosecutions are for minor traffic offenses.