Two years ago, running against Sen. Debbie Stabenow for one of Michigan's U.S. Senate seats, John James proclaimed he backed President Trump "2,000 percent." He lost the race by 6 percentage points, but the state GOP remained enthusiastic about the Black businesssman, and he has no opposition in the August primary. He'll face Sen. Gary Peters in November. 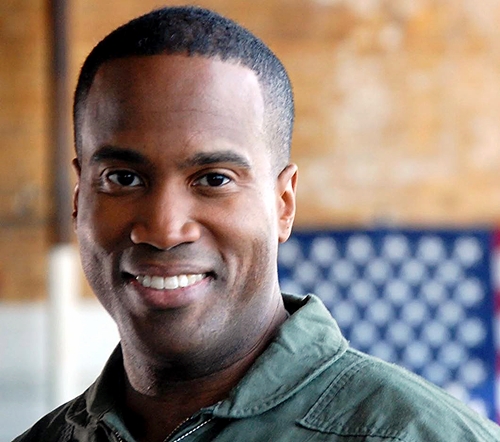 John James in a 2018 campaign photo

But 2020 is a very different political landscape, in racial terms and in public opinion about the president, who has aroused animosity with his attacks on Black Lives Matter protests around the country.

Which leaves James with a very tricky task: How to thread the needle with his party's Trump-loving base while not making a fool of himself with other voters, particularly African Americans.

A profile in The New York Times lays out the problem: He isn't offering anything other than "gentle and equivocating criticism" of the president and a wavering approach to BLM concerns.

His cautious approach has stirred a debate among African-American supporters and opponents alike. Hasn’t the time long passed for hedged and ambivalent responses to the president’s remarks on race? And what defines someone like Mr. James first: being Black or being a Republican?

Mr. James’s response is simply that he is an American. But other answers haven’t come so easily. He said his impulse after seeing the Floyd tape was to call his father and head to a Black Lives Matter protest. But then he decided against protesting, reasoning he could do more to help through his campaign. Recently, when he and his wife tried to explain the protests to their 5-year-old son, the boy didn’t understand. “I thought Martin Luther King fixed that,” Mr. James recalled his son as saying.

... “At some point, John is going to have to separate himself and demonstrate a stronger voice, an independent voice,” said Jimmy Greene, a businessman in Saginaw who has helped raise money to support Mr. James.

James granted an interview to the NYT, co-bylined by Jeremy W. Peters and former Freeper Kathleen Gray. But he sidestepped questions about racially influenced current events, including renaming military bases named for Confederates and Trump's retweet of a supporter yelling "white power." He offered himself as a "cultural translator" to explain Black American to white conservatives.

The interview itself is remarkable. James has generally not offered his time to other news media in Michigan, preferring to campaign at private events.