After apparently ducking interview requests from Detroit Jewish News for two years, Rashida Tlaib has a reason to sit for questions now. Her "primary race against Detroit City Councilwoman Brenda Jones, is competitive," editor Andrew Lapin writes in his cover story on the first-term congresswoman from Detroit. 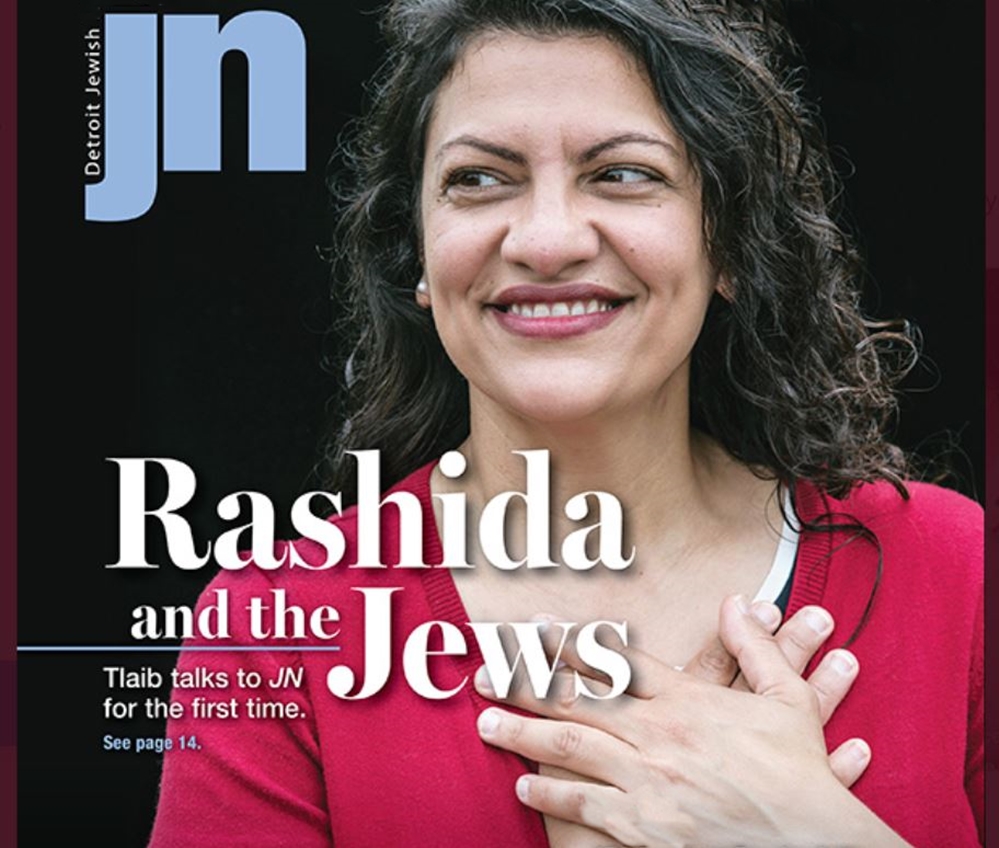 Portion of the new issue's cover.

He describes Tlaib as "Congress’ most vocal critic of Israel and the U.S.-Israel relationship," and sets the stage for hot-button topics:

This is the first time Tlaib has talked to the Detroit Jewish News. She and her staff claim this is the first time they were aware the JN had tried to contact them; but in fact, the JN has made several interview offers to her since 2018, when she became the first Palestinian woman elected to Congress and began making headlines for her vocal criticism of Israel.

The first of 25 questions at Stoepel Park in Northwest Detroit and in an email follow-up is sharp: "To many of our readers, you are Public Enemy Number One. What is your reaction?"

The 43-year-old representative responds, in part:

"I grew up in Wayne County, all my life in Southwest Detroit, and have worked with organizations like Detroit Jews for Justice on stopping water shutoffs, pushing the community benefits movement in the city, always working side-by-side on social justice issues. ... I truly believe in human rights for everyone."

Her position on Israel, she says later, has been "misinterpreted or not fully understood." She also asks for tolerance from those who doen't share her views:

"There should be complete freedom to speak up ... without being targeted as being anti-Jewish." 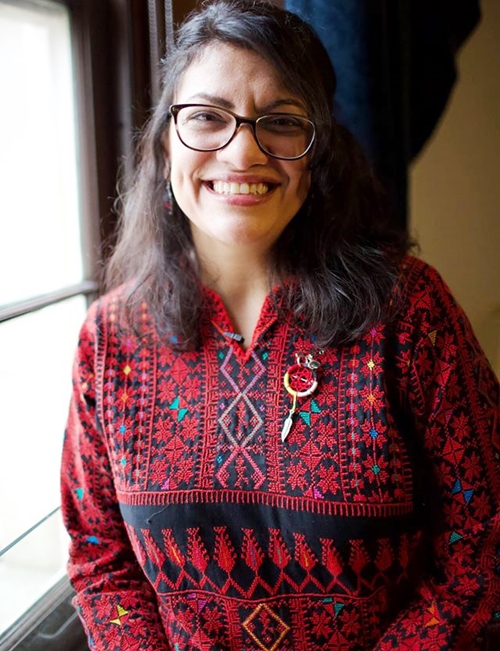 "There should be complete freedom to speak up ... without being targeted as being anti-Jewish." (Photos: Facebook)

The Southfield-based weekly, which says it has 17,000 subscribers, describes itself as "a pro-Zionist newspaper that has been serving Metro Detroit's Jewish community since 1942." Lapin, editor since January, acknowledges separately that this is no ordinary interview.

Tlaib "isn’t shy about criticizing (some would say slandering) Israel on the national stage," he writes in a column.

"I imagine this issue will spark some debate. I hope that debate can be respectful. ...

"One area where Rep. Tlaib and I are closely aligned is that it's valuable to have conversations like this with people who may disagree with you, particularly when the matter at hand is so deeply intertwined with questions of religion and national identity.

"We are living in a very challenging moment for Israel; for Detroit; for the Jewish people; and for the world at large. To survive as a people, we must be willing to talk. ... After all, dialogue is a sacred Jewish value."

Excerpts from the congresswoman's replies in the issue published Thursday are followed by a sampling of reader comments:

► Frank talk: "I will continue to try my best to move forward in a very thoughtful way and make sure that I don't say anything to make somebody feel like I think they’re 'less than' because of their faith. But I want to speak truth."

► Palestine and Israel: "If people saw me more as a granddaughter, versus a congressmember, they would understand why I have said we need to push for true equality and justice in Israel. The lens I bring to the issue is something I hope people welcome because I don’t think there has ever been a member of Congress with a living grandmother or relatives in the occupied territories of Israel." 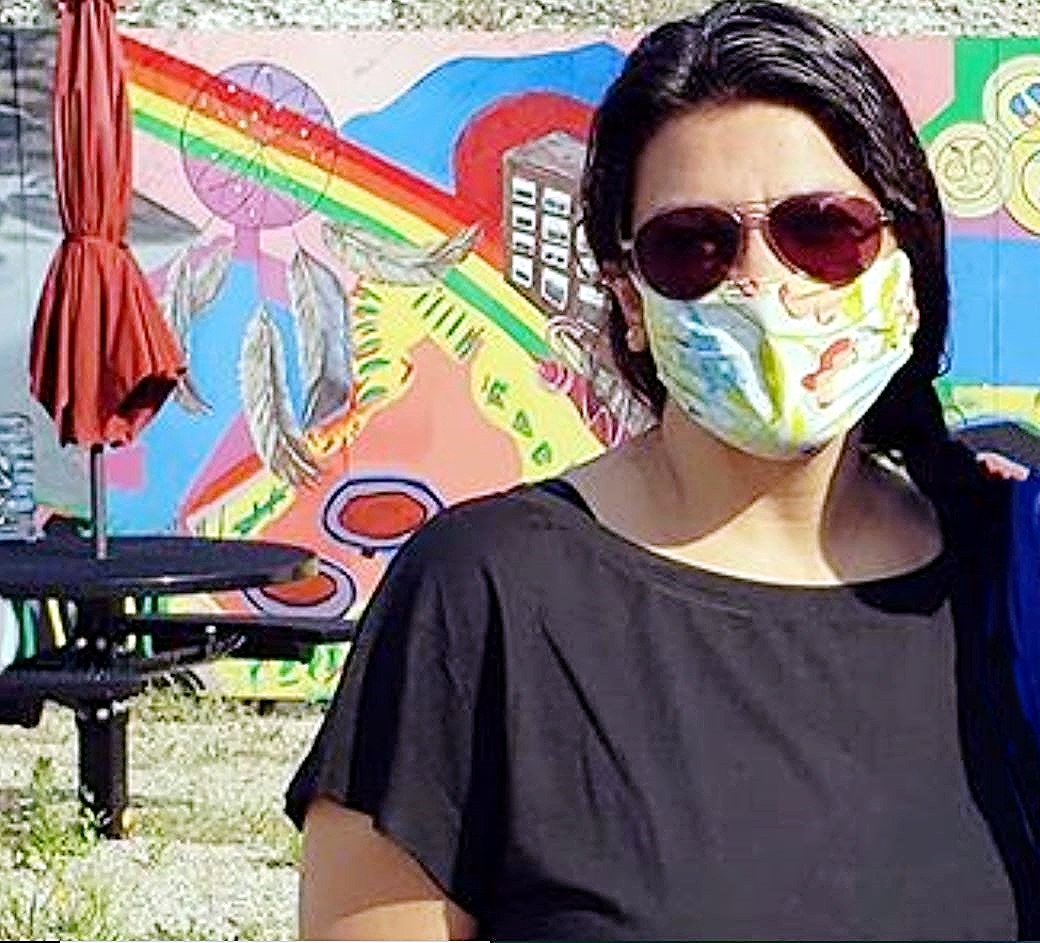 Rashida Tlaib: "We need to push for true equality and justice in Israel."

► Boycotting Israel: "People want to taint the freedom to boycott. It's a peaceful way to speak up and say: 'I'm against these human rights violations or these policies and this racism.'” And I am absolutely, very much adamant that people need the right to boycott.
"I raised my voice and said: 'I believe in that kind of movement.' I don’t know where we would be in our country without the Montgomery bus boycotts. It's something that’s part of our American fabric.
"So absolutely, people need to stop saying that the BDS [boycott, divestment, sanctions] movement is somehow anti-Semitic — there are Jews who support the BDS movement. There are folks who truly believe in stopping racism of all forms, and they use the boycott as a form of speech. ...
"There are people in my caucus [who] don’t support the BDS movement, but they support a free Palestine. They support a Palestine that has equality and can live in peace."

► Pitch for votes Aug. 4: "I've been in [the] community with my Jewish neighbors fighting for numerous social justice issues, including water, environmental justice, racial justice and more. I'm a person who's rooted in justice and standing up to oppression and that's what folks can continue to expect from.
"I won't back down from fighting for the humanity and ability for everyone in my district to thrive." 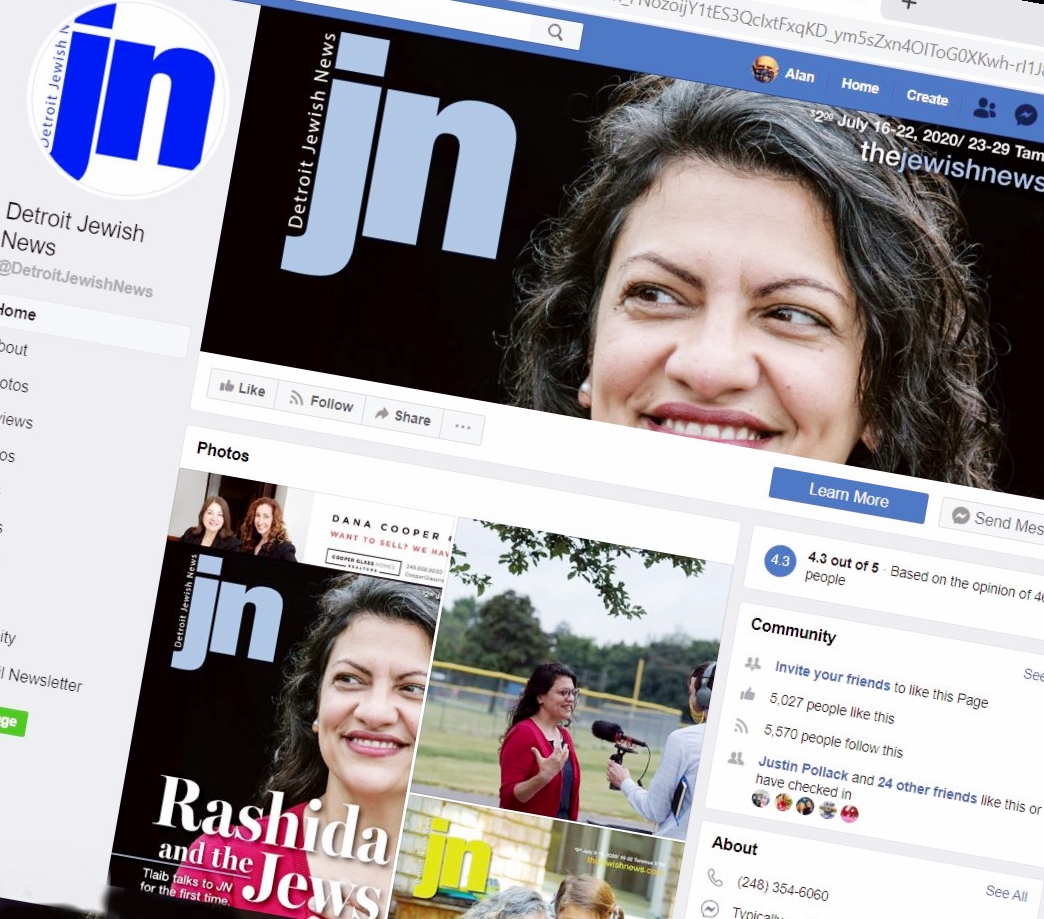 ► "We’re all a part of the same community. I think it’s a good sign to show that she has reached out and engaged in conversation." -- Austin Avison, Detroit

► "The 'Jewish' News. What a shanda!" -- Mendy Margolis, ex-Detroiter ;iving in Jerusalem

► "There wasn't a reason to interview her. She is an evil person to the Jewish community." -- Mitchell Pressel, Eastpointe

► "She will do everything in her power to help the Palestinians and not the Jews in Israel." -- Arnie Goldman, Farmington Hills

► "Her people are coming after our people." -- Alex Bensky, Royal Oak

► "I know what I need to know about Tlaib and so should everyone else by now." -- Mickey Levin, Farmington Hills

► "I am frankly shocked at the blanket cancelling of the DJN for posting this brave piece. Holding our leaders accountable is part of a thriving democracy." -- Sophie Loeb, Detroit

► "It’s horrible that the JN collaborates with an overt anti-Semite and anti-semitism." -- Michael Aldouby, Livonia

► "I would not ever believe a word she says." -- Louise Abrams, Farmington Hills

► "I don't think I can believe anything ever written in the Detroit Jewish News again." -- Lemas Mitchell, Romulus

► "Words cannot describe my disappointment and disgust not only that the JN would interview her, but they would put her on the cover." -- Judie Blumeno, West Bloomfield

► "It is very disappointing to see this as the lead in the Jewish News. Dividing our people during this very difficult time is far from helpful." -- Andrea Rogoff, Detroit

► "I’m very disappointed that my Jewish community is immediately cancelling the DJN for holding a diplomatic conversation. If anything, as a young Jew, I will become a new subscriber as appreciation for the DJN holding tough conversations.
"I am frankly surprised by the vitriol and blanket slandering of a woman who has deliberating engaged with the Jewish community on numerous social justice issues." -- Sophie Loeb, Detroit

► "Looking forward to next week’s glowing profile emphasizing our community's commonalities with Minister Farrakhan. Perhaps the following week y’all can profile Ice Cube?
"Rewarding one of the country’s most pronounced, powerful and vicious anti-Semites with a cover story in the Detroit Jewish News is irredeemable. This is a deeply shameful editorial decision and you deserve to lose subscribers." -- Jesse Arm, New York City

► "Her history has shown how evil she is and how much hatred she has to our people. Our people have suffered enough and we are suffering even more right now, and the suffering will never end until people like her quit getting their voices heard." -- Al Wright