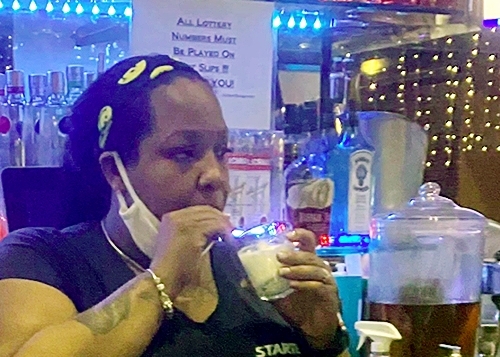 A maskless employee drinks behind the bar at Starters. (Photo: Fox 2 video)

A bartender at Starters Bar & Grill on Detroit's west side is off the job after failing to properly wear her mask while serving customers, then threatening one who confronted her.

A female guest took her story to Fox 2. She says when she started recording to show the bartender with the mask around her chin "talking over everybody's food," the bartender called her a bitch and threatened to fight.

"She began to just berate me and call me names and no one was able to calm her," said the woman.

Starters has suspended the employee and says it will retrain workers on Covid safety.

Cases of the disease are climbing in Michigan, prompting officials to renew their push for the public to wear masks.