The Michigan Supreme Court dealt a potentially serious blow to counties across the state with a unanimous ruling Friday that those counties cannot profit from property sales of tax-foreclosed parcels, and must return the proceeds to the former owners. 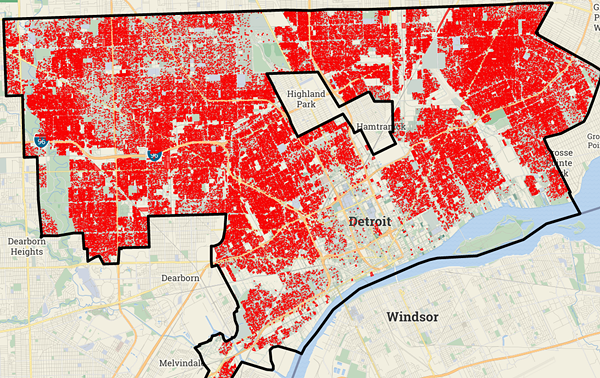 The case stemmed from Oakland County, where plaintiffs Uri Rafaeli and Andre Ohanessian, in separate instances, sued for compensation after their property was taken and resold.

Rafaeli owed $8.41 in delinquent taxes that had grown to about $285 due to penalties and interest when Oakland County Treasurer Andy Meisner foreclosed on his Southfield home in 2014. The county sold it for $24,500 and kept the excess proceeds. Ohanessian owed $6,000 in overdue taxes to Oakland County in 2014 and his home was sold for $82,000 following tax foreclosure.

The court ruled that the sales constituted “unconstitutional taking."

The implications for counties like Oakland and Wayne are serious. A 2017 investigation by Bridge Michigan and WDET found that the profits from such sales have helped Wayne County with around $421 million since the 2008-09 financial crisis led to widespread foreclosure in Detroit and surrounding areas:

The delinquent tax revenues helped erase a $22.5 million deficit in 2014 that forced the county into a consent agreement with the state to monitor its finances. Last year, the state relinquished oversight, and the county’s turnaround plan estimated it will collect $286 million from 2015 to 2019 from back taxes, fees and auctioned properties.

Christina Martin is an attorney for Pacific Legal Foundation, which brought the cases in Oakland County, and is quoted in the Detroit News report:

“No one in Michigan should lose the entire equity in their home or land for falling behind on their property taxes," Martin said.

The Supreme Court has remanded the case to the Oakland County Circuit Court for further proceedings. We cannot determine what the impact will be on Wayne County until the Circuit Court makes a determination of how the decision will be applied. Also, it is our understanding that the ruling applies to surplus action proceeds.

In fiscal year 2019, the Wayne County office made $9 million from sales of foreclosed properties.