NEOWISE comet still visible in night sky, but not for long 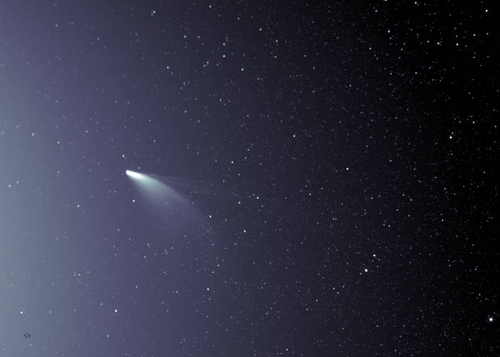 First of all, yes, NEOWISE, the name given to the new darling of the summer sky, is an acronym. It was named for the NASA space telescope that discovered it: Near-Earth Object Wide-field Infrared Survey Explorer. You might hope it was named some version of "new wisdom," 'cause lord knows we could use some of that in this stupid world, but nope -- acronym.

It's the first comet you can see with your naked eye since Comet Hale-Bopp of the late 1990s, which you might recall led to a mass suicide in San Diego, by 39 members of a religious cult who believed the comet was camouflage for a spacecraft that had come to take them to their next home. NEOWISE sort of snuck up on us, so hopefully no one has any apocalyptic designs on the thing, and it's just here to charm and amaze us for a few days.

How to see it? The Lansing State Journal has helpful tips:

It will be bright enough to see without binoculars or a telescope in Michigan for the next few days, primarily at dusk and dawn. Once it vanishes, it won't be back around for roughly 7,000 years.

The story suggests leaving the city (light pollution will make it harder to see), looking in the right part of the sky (use the compass on your phone, or an app), and go soon -- you only have a few days. And keep your heart open to the wonder of it all:

"It takes you away from the things that are bothering you on the planet Earth and focuses your attention on how vast the universe is, how extensive and mysterious," (Capital Area Astronomy Association President Michael Rogers) said. "The primary reason to get into [astronomy] is that it takes you away from your everyday cares and worries and makes you focus on the entire universe and the infinity of time and space."

You might also spare a thought for the late Comet Bar, cruelly taken from us to make room for Little Caesars Arena, and a worse trade it's hard to imagine.