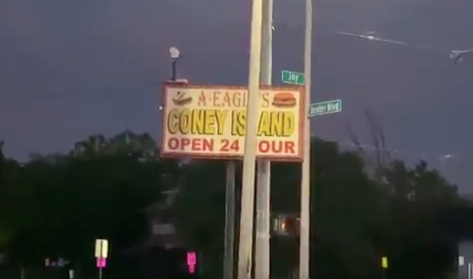 Update, 10 a.m. Monday: Detroit Police arrested a suspect this morning in an alley on Tennyson near Oakland Parkway, Fox 2 reports.

Police have yet to disclose a motive in the shooting that left three dead and one wounded.

Three men were killed and one was injured in a shooting Sunday night inside Eagles Coney Island on Dexter Avenue near Joy Road in west Detroit, Fox 2 News reports.

Fox 2's Charlie Langton said there didn't appear to be any noticeable argument. Someone inside produced a gun and started shooting.

Four shot; three dead, one critical - the shooter is still on the run. The shooting happened at about 11 o’clock Sunday night at the Eagle’s Coney Island on Dexter and Joy. @WWJ950 @FOX2News pic.twitter.com/HKqB3C76cA