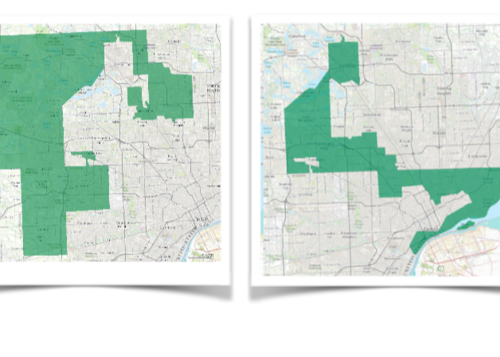 Two gerrymandered Congressional districts in Southeast Michigan. Yes, one is giving you the finger.

In an effort to ensure fairness, the group to be trusted with redrawing Michigan's political boundaries is to include four Democrats, four Republicans, and five people who don't affiliate with any party.

But some applicants who fall into that last category — those who'd seemingly be the least compromised — have in fact donated to candidates on only one side of the political aisle.

The Detroit News made the discovery as it examined the giving histories of 200 semifinalists randomly selected from a pool of 9,300 applicants for the nonpartisan redistricting commission.

The commission was established by a 2018 voter-approved initiative to end gerrymandering. Michigan is among the most gerrymandered states; recent elections have seen a majority of residents vote for Democratic state legislative candidates, but a marjority of seats go to Republicans.

The field of 200 semifinalists will next month be whittled down to 13 commissioners by top Democrats and Republicans in the state House and Senate. The News reports it will be up them to conduct a vetting process that will "presumably" look for those who say they're unaffiliated, but may lean one way or another.