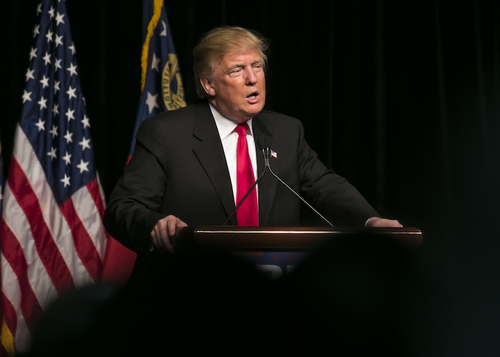 The Trump administration has added Detroit to the list of cities where it plans to send federal law enforcement officers amid nightly protests against police brutality.

The initiative, called "Operation Legend," has been billed as one to combat rising crime in urban areas. In Portland, armed officers in paramilitary gear arrested and detained protesters at largely peaceful weekend demonstrations.

But local authorities say the federal presence in Detroit will be different.  Police Chief James Craig told the Free Press Thursday that the officers would help the department respond to gun violence, which has recently spiked. A spokeswoman for the U.S. Attorney's Office also said Operation Legend's "expansion to Detroit has nothing to do with any protests."

Trump already announced agents would be sent to Chicago, Kansas City and Albuquerque, New Mexico. The White House mentioned plans to add Detroit, Cleveland and Milwaukee over the next three weeks in an online notice Wednesday.

Craig and Mayor Mike Duggan have said they oppose having federal officers respond to the city's racial-justice demonstrations, noting they've been largely peaceful. But on Wednesday, Duggan said he would welcome federal help in addressing crime.

"If you want to talk about extra gun prosecutors in the U.S. Attorney's office or ATF taking illegal guns off the street, we would support that kind of help," the Free Press quoted Duggan as saying. "But we've made it very clear that Department of Homeland Security people coming to town to deal with the protesters is not going to be acceptable and my indications are we do not expect to see that here in Detroit."

Trump has tied the deployment to protests in his remarks. In a Wednesday briefing, he said, “In recent weeks there has been a radical movement to defend, dismantle and dissolve our police department,” and that it was responsible for “a shocking explosion of shootings, killings, murders and heinous crimes of violence.”

On Monday, the group coordinating Detroit's protests, Detroit Will Breathe, rebuked any effort to deploy federal officers to Detroit.

"The decision of Donald Trump to utilize federal forces against American citizens exercising our constitutional right to protest is fundamentally racist, fascist and serves as a tactic of political repression," the group wrote on Instagram. "The deploying of these forces to Detroit is another step in Trump’s orchestrated and coordinated attack against the free speech of protestors. This is a risk to the lives of Detroiters and is a blatant threat to the public safety of protestors and residents in general."

Detroit police said those officers were with the Drug Enforcement Agency and working in the city under a separate White House initiative now under way for months, "Operation Relentless Pursuit."

Earlier today, several armed DEA, CBP and FBI agents were sighted in plain unmarked cars on Seven Mile and Evergreen. The decision of Donald Trump to utilize federal forces against American citizens exercising our constitutional right to protest is fundamentally racist, fascist and serves as a tactic of political repression. In Portland these agents brutally assaulted and illegally detained protestors, even failing to keep a record of the detentions. The deploying of these forces to Detroit is another step in Trump’s orchestrated and coordinated attack against the free speech of protestors. This is a risk to the lives of Detroiters and is a blatant threat to the public safety of protestors and residents in general. This is a politically motivated attack on the movement in defense of Black lives and the collective unity displayed by integrated crowds demanding an end to the suffering of Black and Brown people in this country at the hands of the government throughout the last two months. This movement has beaten back every attempt to silence and violate our constitutional right to assemble and protest, and we will continue to do so. We will not be intimidated by the presence of federal agents. Therefore, we will continue our mobilizations and actions as planned. Not only do we call on the Trump administration to get his federal troops out of Detroit, but we call on City Council, Mayor Duggan, Gov. Whitmer and Attorney General Dana Nessel to uphold the constitutional rights of protestors against the intimidation tactics of federal agents.

A post shared by Detroit Will Breathe (@detroitwillbreathe) on