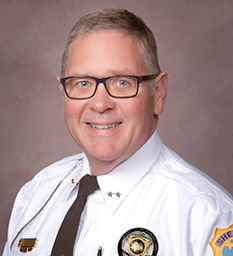 A sheriff who got a Facebook message calling him "a fat ass who needs to go on a diet" sent his detectives to investigate in a story that we first hoped was satire but unfortunately turned out to be real life in Michigan.

WWMT learned of Kalamazoo County Sheriff Richard Fuller's hunt through a Freedom of Information Act request. The full message to him reportedly said, "Your a fat a-- who needs to go on a diet. Stop us from living. Come get me if you want me tubby as fat b----".

The report showed the sheriff took the message as threatening in nature and showed Fuller requested his employees make contact with the sender and warn against any threatening posts in the future.

The report showed on April 6, 2020, two Kalamazoo County detectives questioned a man at his home in Richland. The report said the 48-year-old denied writing the post and claimed his Facebook account had been hacked.

An expert asked by the TV station to weigh in says what we're all thinking:

The alleged 'tubby' talker too thinks the response was too much:

He noted a lot of people say lots of things on social media and those comments don’t result in a visit from law enforcement.

As do a couple other sheriffs:

We asked several other sheriffs in West Michigan about how they would handle the message. While most declined to comment, the two who did respond said they would have just ignored the messages.