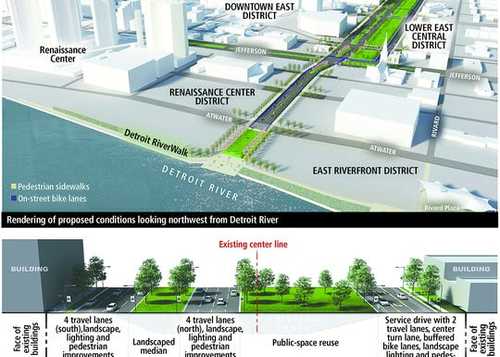 An ambitous road project to link downtown Detroit with the Lafayette Park area east of I-375 has been shelved for unclear reasons.

The plan to turn the sublevel freeway into a surface street was in the works for six years and will now be kicked down the road at least six more, Crain's reports. It was aimed to promote walkability and development in the area; a number of retail and residential projects were already planned.

The project reportedly was shelved in January as Gov. Whitmer announced she would issue several billion in bond spending for highway and trunkline road construction around the state.

But the I-375 project got taken off the list approved by the State Transportation Commission, a five-member panel that has just one member from metro Detroit that usually takes its cues from the sitting governor.

"The State Transportation Commission feels (I-375 is) not aligned with what the governor's Rebuild Michigan vision is, so they decided to take it out," MDOT Director Paul Ajegba said.

Millions have already been spent on planning and other costs. And even though the project won't happen for the foreseeable future, the state still plans to spend $6 million next year on a design.