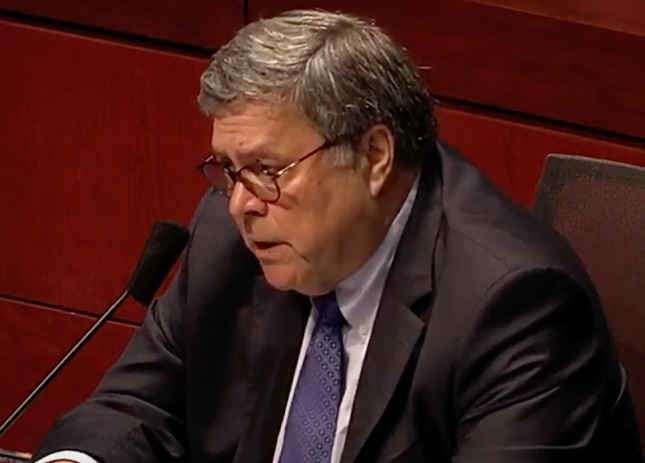 In a highly contentious and partisan hearing on Capitol Hill, Democratic representatives Tuesday attacked Attorney General William Barr for ignoring gun-toting protesters in Michigan earlier this year and threats against the governor while deploying troops to go after Black Lives Matter protesters in Washingon, D.C., and Portland.

"When white men with swastikas storm a government building with guns, there is no need for the president to ‘activate’ you, because they’re getting the president’s personal agenda done,” Rep. Primila Jayapal (D-Washington) said during confrontational questioning of Barr, testifying to the House Judiciary Committee.

“But when black people and people of color protest police brutality, systemic racism and the president’s very own lack of response to those critical issues, then you forcibly remove them with armed federal officers [and] pepper bombs because they are considered terrorists by the president.”

"Are you aware that these protesters called for the governor to be lynched, shot and beheaded?"

In late April, rifle-toting protesters stormed the Capitol and went inside to protest Gov. Gretchen Whitmer's stay-home orders and restrictive policies during the pandemic.

Barr said he was unaware of threats against the governor, but insisted "Michigan authorites" were capable of handling the situation. He said his job is to protect the White House and federal properties, and said the forces in Portland are dealing with violence.

"The fact of the matter is if you take Portland, the courthouse is under attack," he said at another point. "The federal resources are inside the perimeter around the courthouse defending it from almost two months of daily attacks where people march to the court, try to gain entrance and have set fires, thrown things, used explosives, and injured police."

Barr insisted troops were used to move protesters further away from the White House for security reasons, though Trump skeptics have insisted the president wanted it done for a photo opportunity.

"You didn't send a secret paramilitary police force on horseback to unleash tear gas and pepper spray, billy clubs and rubber bullets against these protesters storming the state Capitol of Michigan," Raskin said. "No, you embraced their cause by joining litigation against the governors of Michigan and Virginia.

"Now, of course your side lost your motions for emergency injunctions, but you got to spread Trump's message that it was time to call off the stay-at-home orders, the masking and social distancing."