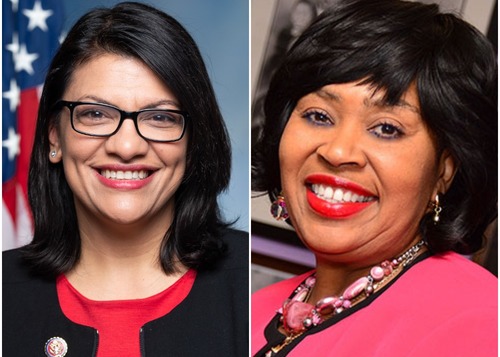 With less than a week until the Aug. 4 primary, Rep. Rashida Tlaib (D-Detroit) enjoys a substantial lead over City Council President Brenda Jones and has picked up a key endorsement from House Speaker Nancy Pelosi.

A survey conducted last week by Michigan pollster Ed Sarpolus, of Target-Insyght, reportedly finds Tlaib nearly 30 points ahead of Jones, 52% to 24%, with 23% of respondents undecided. The poll of 500 registered voters, first reported by Jewish Insider, had a margin of error of 4.5 percentage points.

It's a major improvement from an April poll by Sarpolus that showed Tlaib with only a 9-point lead.

Pelosi's endorsement could provide an additional boost as Tlaib, a progressive, seeks to win over moderates. A group backing Jones had sent a mailer containing a photo of the council president with the House speaker. Pelosi picked Tlaib despite previous tensions with the so-called "Squad," a group that includes Tlaib and three left-wing Democrats.

The positive outlook for Tlaib is the apparent result of a hard-fought campaign: The Southwest Detroiter has raised $3.1 million to Jones' $170,000.

Jones lost the seat to Tlaib by a sliver in 2018, though did win the race to fill the balance of former Rep. John Conyers' term.