Just yesterday, the Deadline Detroit newsletter -- to which you should be subscribing -- suggested that if you're feeling worn out, rundown and sick to death of the current situation, you might consider a refreshing trip to the country, i.e., some of the pretty rural spots of our beautiful state. 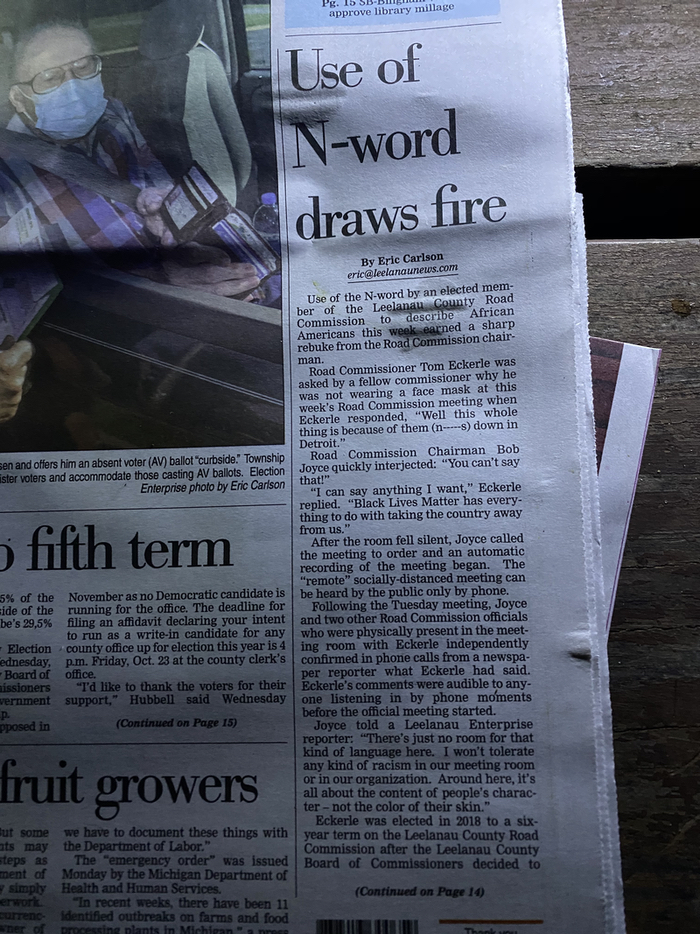 Maybe want to reconsider that.

Our colleague Violet Ikonomova is out on a jaunt to the Mitten's little fingers, and sends back an alarming dispatch from the Leelanau Enterprise, a story about a meeting of the county road commission.

Member Tom Eckerle was asked why he wasn't wearing a mask, and he is reported to have replied:

"Well, this whole thing is because of them n-----s down in Detroit."

Another commissioner said, "You can't say that!" and Eckerle replied:

"I can say anything I want. Black Lives Matter has everything to do with taking the country away from us."

The public meeting did not have any members of the public present, for social-distancing purposes, and the remarks were not included in a recording of the meeting because they were offered before it was called to order. But three other commissioners confirmed Eckerle's comments.

In a 2018 Leelanau Enterprise story about Eckerle's election to the commission, he is described as a "retired farmer who worked for 21 years as a gravel pit manager" who was 74 years old at the time of his election.

The Leelanau County Road Commission normally deals with seasonal weight restrictions and snow-plowing issues. Depending on the tolerance of the local citizenry, we suspect the next meeting may venture onto unplowed roads.